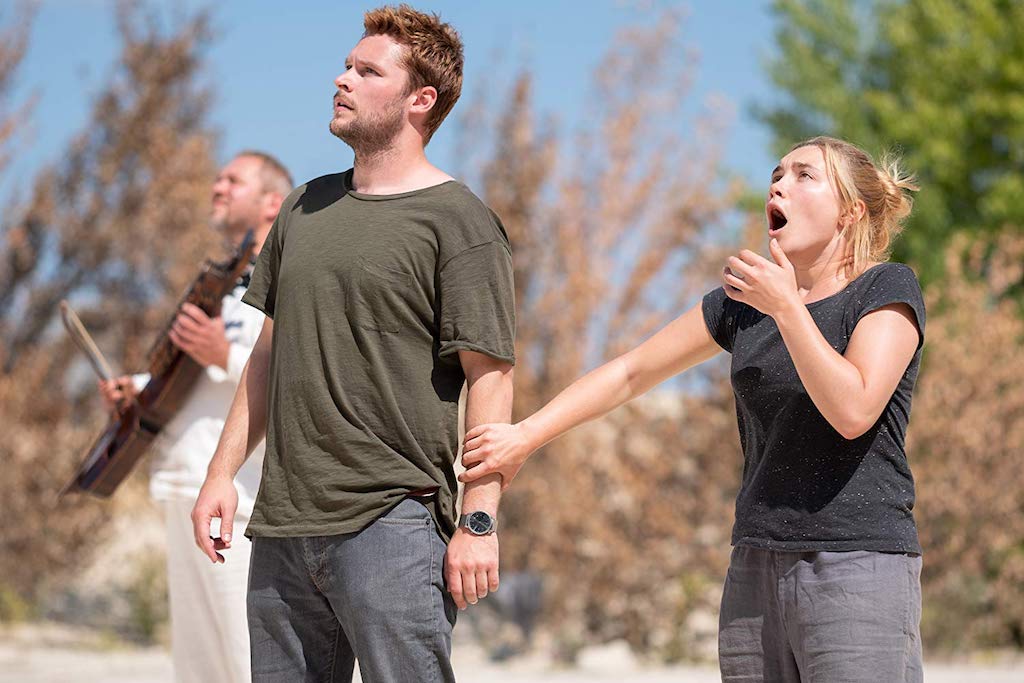 Given the immense acclaim that surrounded his debut feature Hereditary, the expectation of writer/director Ari Aster’s sophomore project is understandably high.  The anticipated second album, if you will, Midsommar sets a similar pace and tone to Aster’s aforementioned launching in that it presents an unspeakable tragedy in a subtle yet still unnerving manner, planting its protagonist – Dani, played by the electrifying stellar Florence Pugh – in a forward momentum regarding her grieving process.

When we first meet Dani she’s on the brink of a breakdown, her bi-polar sister’s cryptic e-mail message suggesting a tragedy is to befall her.  Emotionally wrecked and seemingly on the brink of losing her disinterested boyfriend of 4 years (he’d say 3 and a half) Christian (Jack Reynor), the devastation links them momentarily closer together, much to the annoyance of his stereotypical dudebro buds Josh (William Jackson Harper) and Mark (Will Poulter), and she essentially invites herself to join them on their planned trip to a once-in-a-lifetime midsummer festival in a remote village in Sweden.

Whilst tonally Midsommar could be likened to Hereditary, and its folk horror mentality easily links itself to the 1973 British classic The Wicker Man, this film very much harnesses its own identity.  It’s not necessarily scary in the traditional genre sense, but make no mistake that what you witness over the course of its near-150 minute running time is undeniably disturbing, and there’s an immediate lingering of dread and tension that laces the skirts of each frame. 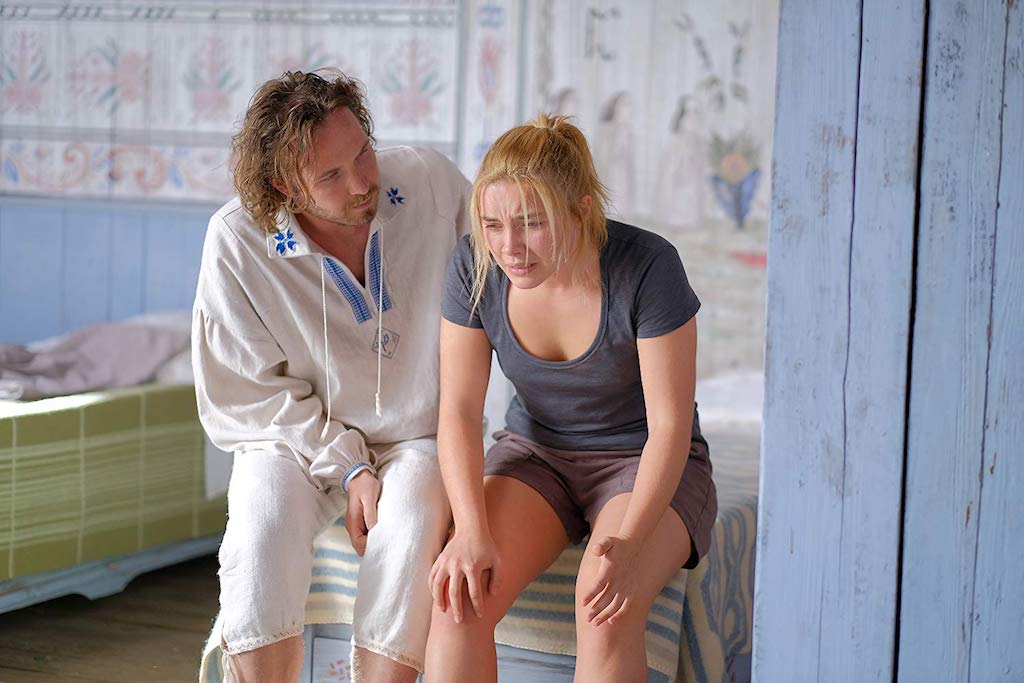 Aster wants you to be disarmed though as the majority of Midsommar is set in the daylight, and when the group first arrive at the grounds of the festival it’s deliberate that the bright colours and unusual dancing routines appear so rich and beautiful as to mask the true terror that awaits them; a sequence atop a rock-faced cliff is truly core-shaking in its graphic depiction of violence.

Similar to how fellow genre manipulator Jordan Peele (Get Out, Us) invites his audience to analyse his work, Aster has layered Midsommar with deeply contextual imagery – almost of a foreshadowing nature – but, at the same time, you don’t need to take it all in to appreciate what he has achieved.  Also much like Peele, the surprising humour found within Midsommar could catch people off guard.  There’s an oddity to many of the festival’s traditions that can’t help but evoke a genuine reaction of humour, a reaction that seems intentional on Aster’s behalf, as well as Harper and particularly Poulter earning comedic traction with their reactional quips to their newfound surroundings. 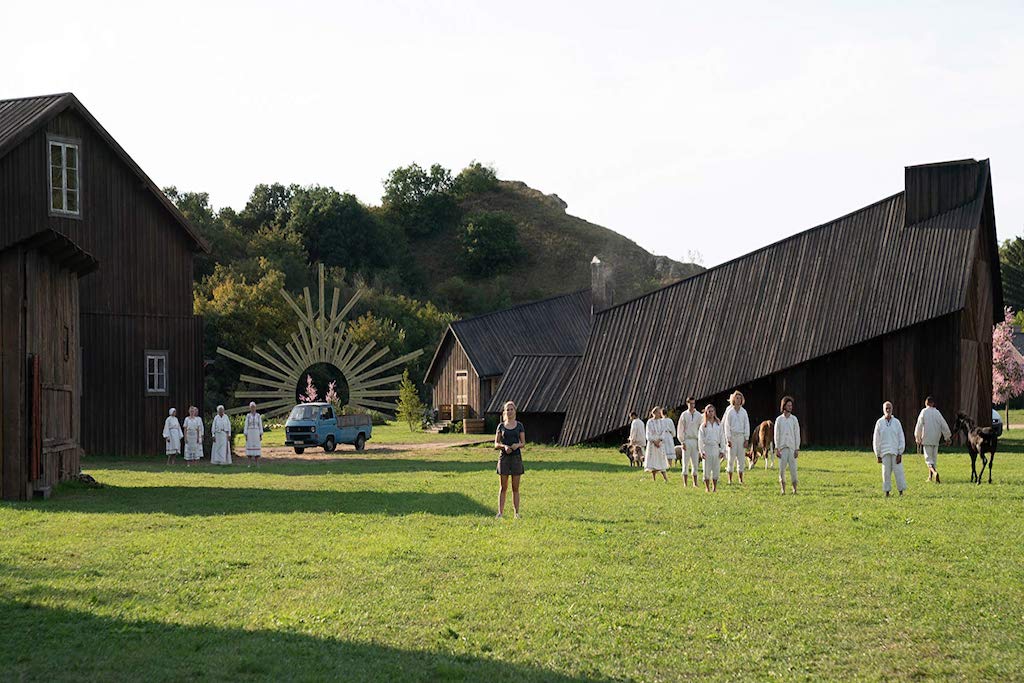 Avoiding the type of traditional horror narrative that links one shocking set-piece to another with a relative pace, Midsommar drifts from moment to moment, practically mimicking the experience one has on the psychotropic substances our characters constantly ingest throughout; the visual pallet is, at times, incredibly arresting and hallucinogenic, mollifying us with a euphoric beauty before we come back down and face reality in all its brutality.

A film that’s at once emotionally intelligent and terrifying in its sound justification of the torture endured on-screen, Midsommar – brilliant as it is – is still likely to be shunned by many expecting something more traditional.  The pacing is deliberately stilted, which could test the patience of many a viewer, and anyone expecting a Hereditary Part 2 will be similarly disappointed, but open-minded appreciators of complex horror will be rewarded with another genre stand-out that addresses the fearfulness within relationships, the sound mind-frame of ritualistic practices, and the terror behind a masked religion.

A couple travels to Sweden to visit a rural hometown’s fabled mid-summer festival. What begins as an idyllic retreat quickly devolves into an increasingly violent and bizarre competition at the hands of a pagan cult.

Midsommar (R18+) is screening in Australian theatres from August 8th 2019.