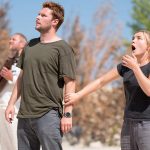 Given the immense acclaim that surrounded his debut feature Hereditary, the expectation of writer/director Ari Aster's sophomore project is understandably high.  The anticipated second album, if you will, Midsommar sets a similar pace and tone to Aster's aforementioned launching in that it presents an unspeakable tragedy in a subtle yet still unnerving manner, planting its … END_OF_DOCUMENT_TOKEN_TO_BE_REPLACED