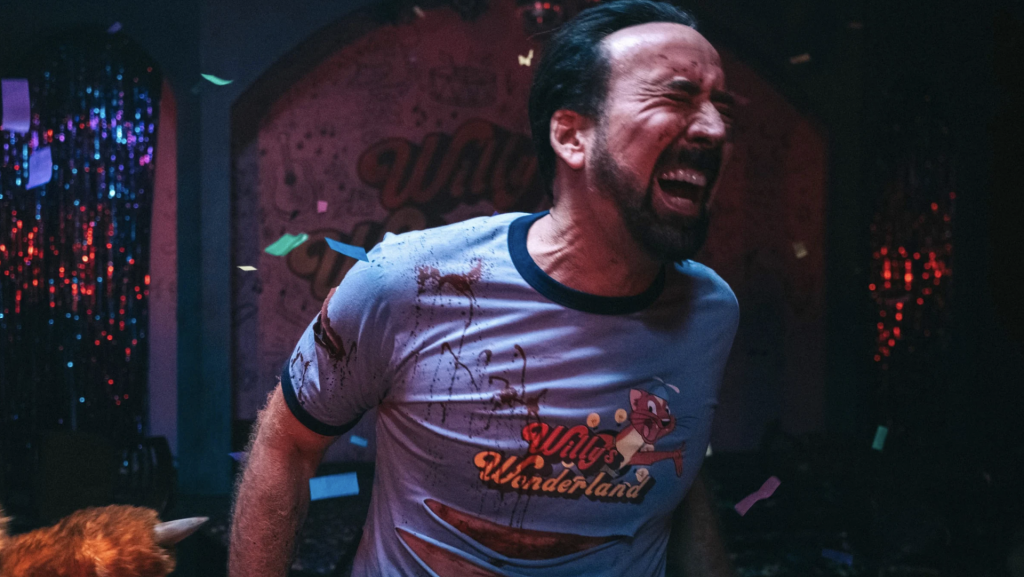 When it was announced that Nicolas Cage – the patron saint of left-field cinema – would be headlining a feature titled Willy’s Wonderland, one that would pit him against a slew of murderous animatronics, it was understandable that the Cage fans felt like they’d be in for a treat.

Another eccentric role for the actor, his Janitor at the centre of Kevin Lewis’s ridiculous romp is utilised in a different manner than we are used to from the performer whose unique style of dialogue delivery is often what draws in his attractors.  Here, he’s practically mute as he passes through a small North Carolina town on his nondescript journey.  Driving over a tire trap, he’s stranded for the evening due to limited resources, and because Willy’s Wonderland leans into its horror movie trappings with a stereotypical ease, it’s proposed by the locals that in exchange for their work on his car, he’ll just have to spend the night cleaning up a decrepit children’s restaurant – the titular Willy’s Wonderland.  Seems abnormal but inherently simple, right?

Given Cage’s penchant for bombastic material, the potential Willy’s Wonderland houses is heavy.  The thought of Cage going up against novelty animatronic characters in an abandoned restaurant is almost too much to comprehend, and when the first sequences of Cage in his element play out with an almost indifference to the surroundings, it feels as if Lewis’s film is going to enjoy indulging in its premise.

However, after Cage’s Janitor (known as such due to the position he temporarily takes on for his evening’ work) disposes of the first couple of attacking animatronics without much of a fuss, the film starts to feel all too repetitive in its set-up.  He cleans, he plays pinball (almost a little suggestively), drinks cans of soda, and then dispatches oversized creations with haste ; it’s ironic that in a film that should seriously commit to its elevated, violent outline, it’s the smaller moments of Cage playing pinball and drinking soda that provide the most entertainment.

Outside of the Janitor’s battles, there’s some typical nonsense regarding a group of local teens, led by the headstrong Liv (Emily Tosta, the only other likeable presence on screen), who are aware of the satanic ritual that brought life to the animatronics and wish to put a stop to it once and for all.  The slasher-friendly vibe introduced to the film through Liv and her group of archetypal friends (all quite horrendously acted, with the vapid Caylee Cowan the biggest culprit of on-screen annoyance) promises even more potential in the murderous fun the film could lean into, but, again, falls short of any promise as it cuts through each character without any sense of delight.

Though Willy’s Wonderland is all too aware of its cheesiness, it never fully embraces it enough.  Cage fans will enjoy his stoic presence, and certainly some imagery on screen is as bonkers as you’d expect, but a film such as this should never leave its audience wanting more.  Willy’s Wonderland should have been an exercise in excess, yet instead it is never absurd enough to truly warrant the cult classic status it so clearly is aiming for.

When his car breaks down, a quiet loner (Nicolas Cage​) agrees to clean an abandoned family fun center in exchange for repairs. He soon finds himself waging war against possessed animatronic mascots while trapped inside.

Willy’s Wonderland (MA15+) is screening exclusively at Dendy Cinemas from April 8th, 2021.  It will be available to rent and/or buy on DVD, Blu-Ray and digitally from April 21st, 2021.