You are here: Home / Entertainment / The Marksman – Film Review 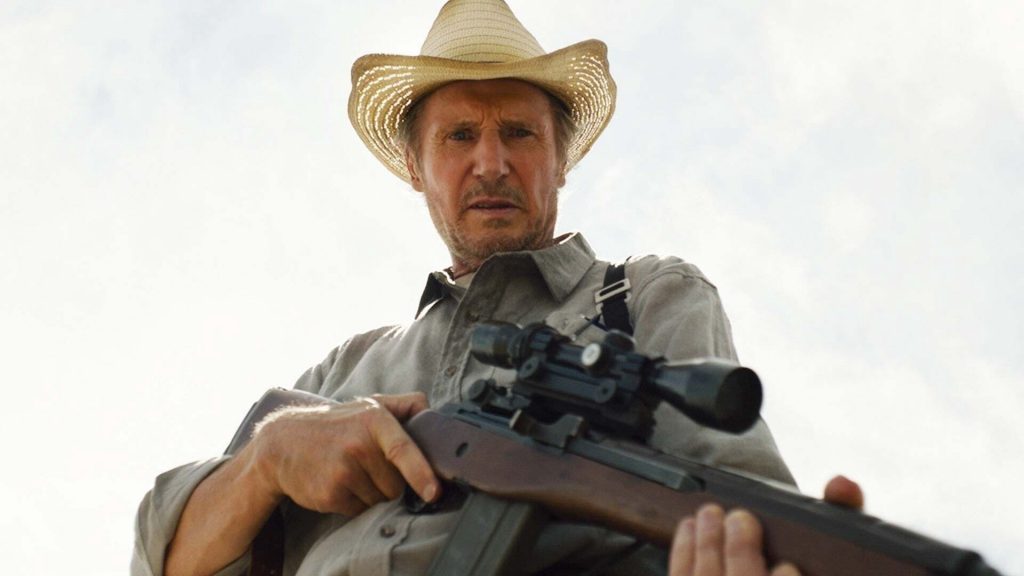 Employing the “particular set of skills” that he transformed into a late-career resurgence back in 2008’s Taken, Liam Neeson is, once again, proving age is little more than a number as, at 68 years old, he’s still as confident as ever embodying the action persona.

Of course Neeson has stated that this will be one of his last hurrahs in the genre, and as a precursor to the eventual swan song The Marksman is far from his top-tier efforts, but it certainly isn’t the worst either.  Employing a bit more of a storyline than his usual fare, The Marksman lays focus on his Jim Hanson, a cattle rancher and former Marine sharpshooter who’s having a bit of a rough go in the wake of his wife’s death, learning that his ranch is to be foreclosed in the space of 90 days.

During a routine patrol of the land verging on the Mexican border, Jim comes across a runaway mother-son duo (Teresa Ruiz and Joe Perez) who are attempting to escape the clutches of the cartel.  Wanting to help but also not willing to become overly involved in their plight, Jim promises them assistance before cartel lead Maurico (Juan Pablo Raba) opens fire and mother dearest is claimed as a casualty.

From here on Jim does what any archetypal action film character would do and saddles up his bullet-riddled pick-up and vows to get the young boy to safety; safety here being Chicago where he has awaiting family.  It’s very standard in terms of its narrative, but at least The Marksman aims for something of a story, as opposed to the set-piece heavy mentality that some of his other genre ventures aimed for.  The dynamic between Neeson and Perez is sweet, and Kathryn Winnick makes for a likeable presence as Jim’s concerned stepdaughter, a border patrol officer (coincidence?) who tries to keep the situation under wraps, despite how incredibly illegal and unlikely the events taking place actually are.

An action film with tested elements of the western genre thrown in for good measure, The Marksman never really aims particularly high, but it at least doesn’t miss the shot entirely, thanks largely to Neeson and his ability to make us care about even the most predictable of circumstances.  Anyone hoping for a Clint-Eastwood-does-John-Wick-type outing will be sorely disappointed as the action never really kicks into gear until the climax, and even then it plays out as expected, but there’s an odd comfort in these type of Neeson-led action films, and that feeling of familiarity manages to push The Marksman a little closer to his recommended target.

Hardened Arizona rancher Jim Hanson (Liam Neeson) simply wants to be left alone as he fends off eviction notices and tries to make a living on an isolated stretch of borderland. But everything changes when Hanson, an ex-Marine sharpshooter, witnesses 11-year-old migrant Miguel (Jacob Perez) fleeing with his mother Rosa (Teresa Ruiz) from drug cartel assassins led by the ruthless Mauricio (Juan Pablo Raba). After being caught in a shoot-out, a dying Rosa begs Jim to take her son to safety to her family in Chicago. Defying his cop daughter Sarah (Katheryn Winnick), Jim sneaks Miguel out of the local U.S. Customs and Border Patrol station and together, they hit the road with the group of killers in pursuit. Jim and Miguel slowly begin to overcome their differences and begin to forge an unlikely friendship, while Mauricio and his fellow assassins blaze a cold-blooded trail, hot on their heels. When they finally meet on a Midwestern farm, a fight to the death ensues as Jim uses his military skills and code of honor to defend the boy he’s come to love.

The Marksman (M) is screening in Australian theatres from January 21st, 2021.