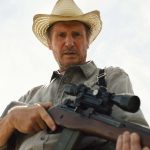 Employing the "particular set of skills" that he transformed into a late-career resurgence back in 2008's Taken, Liam Neeson is, once again, proving age is little more than a number as, at 68 years old, he's still as confident as ever embodying the action persona. Of course Neeson has stated that this will be one of his last hurrahs in the genre, and as a precursor to the … END_OF_DOCUMENT_TOKEN_TO_BE_REPLACED

https://www.youtube.com/watch?v=qbKgqY3Fv9k Given that director Steve McQueen has based himself firmly within the art-house genre - 12 Years A Slave and Shame ranking as previous efforts - one would be forgiven for assuming that his latest would follow suit.  And whilst Widows is still indeed a high-brow picture, McQueen proves more than ample in helming an actioner, … END_OF_DOCUMENT_TOKEN_TO_BE_REPLACED