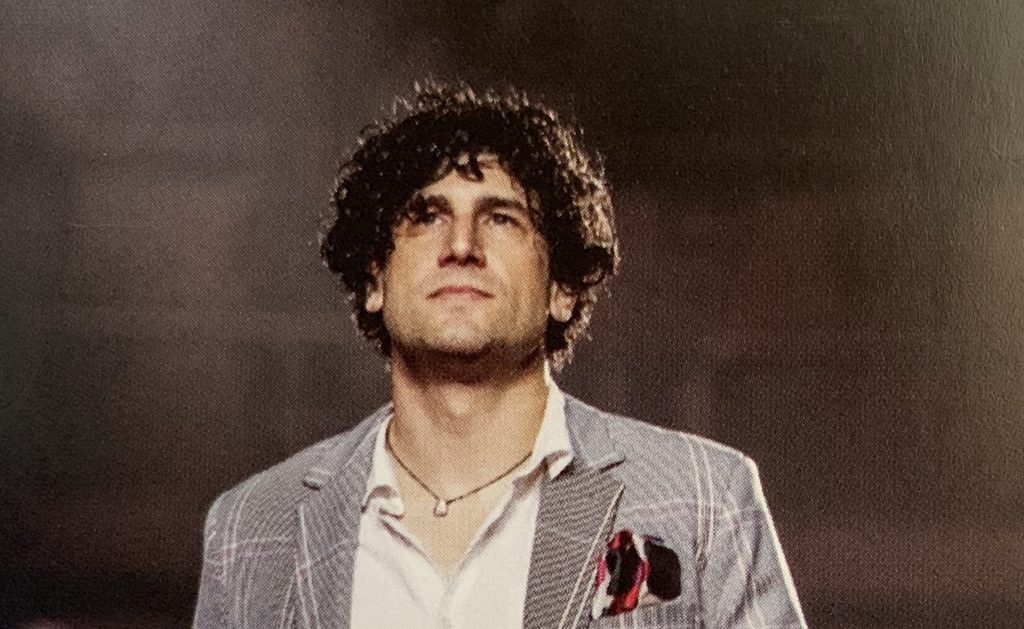 As Archenemy makes its way into local cinemas this week (read our review here), our own Peter Gray was fortunate enough to chat with the film’s writer and director, Adam Egypt Mortimer, where they discussed the casting of Joe Manganiello, how Elijah Wood became involved as a producer, and his own stance on comic books and the superhero genre.

The film is an original story created by yourself, how long had you been working on this?

I started thinking about this movie around 2015.  I was thinking about, even then, we had so many superhero movies.  I’m a life-long comic book fan, I’ve never stopped reading them.  Going back to the early 80’s, maybe even before, comic books were treating superheroes not like a genre, like a mythology with infinite possibilities, and they were treating their readers with an incredible level of sophistication.  You come into something like Frank Miller’s ‘Dark Knight’ and you already know everything about a superhero…you don’t need to catch up the audience. I wanted to do a superhero movie with the same kind of sophistication.  They’ve all seen dozens of  superhero movies by now, so could I tell a story with a different aesthetic, whilst still existing in the mythology of what superheroes can do.

The animated sequences are so beautifully rendered, was there ever a thought of making the film entirely animated?

No.  That’s such an interesting question.  No, though, I wouldn’t know what to do with a whole animated movie.  I love actors so much, and I love photography…coming up with what to do on set.  I’m pleased to here that you loved those sequences so much.  It was a real roll of the dice for me.  I wanted that stuff to be impressionistic, not literal.  A story within a story, and the person telling that story is on drugs, so maybe they’re lying or has a bad memory…you just don’t know.  So we went through these impressionistic styles.  It’s kind of like we were going for more of a feel rather than what’s actually happening.

We started filming at the end of last year.  Started in December, took a break, and started again in January.  It really was a blessing that we had the whole thing done before we went into crazy pandemic mode, so I was editing the movie during the “cover world”, which was great cause I had something to focus on.  I was never in the same room with my editor though, we were doing the whole thing via Zoom.

I was gonna ask how the process was during Covid, so it was obviously a good thing that you had time to really focus.

Yeah.  The animation team were people all over the world working remotely.  So I had drawing the images all the way in Bangalore, India, and the guy doing our animation was in middle America, and our psychedelic compositor was here in Los Angeles.  So we just got together on Zoom calls, looking at different iterations.

You have Elijah Wood credited as a producer. And he produced your other film, Daniel Isn’t Real, how did that partnership come to be?

It’s Elijah and his company, SpectreVision, which he runs with two other people (Daniel Noah and Lisa Whalen), and they were a company I had wanted to work with for so long.  I wanted them to produce my very first movie, which was this tiny slasher movie called Some Kind of Hate, and I could never get in touch with them.  I kept e-mailing them and never heard back.  I went to a festival with that movie, and they were there with their movie, and I said that I had been trying to e-mail them and I remember one of the guys opened his laptop and was like “Oh yeah, I see all these e-mails from you”.  I asked them to watch my movie and they did, and they liked it, and they saw the potential…so I gave them the script to Daniel Isn’t Real.  We made that and it’s just been this great partnership since.  They love genre movies, but they like seeing how you can make something more psychological or more beautiful or more weird.  What they do as a company is what I strive for as a filmmaker.

How did Joe Manganiello come to be involved? That’s a good get!

He was so perfect for this! Really born to play a grizzled, homeless maniac.  It was the same sort of thing where he really liked SpectreVision movies.  He saw Mandy and got in touch with them and they showed him Daniel Isn’t Real.  We got together and I showed him the script for Archenemy, and it was just this perfect “Joe Manganiello movie”.  He looks like Superman, he’s handsome, he’s like the most physically fit man on the planet…but he’s also this great theatrical actor.  He’s a guy who’s done Streetcar Named Desire, he’s this tragic male, Tennessee Williams-type character, and you combine that with the physicality and you have the perfect match. 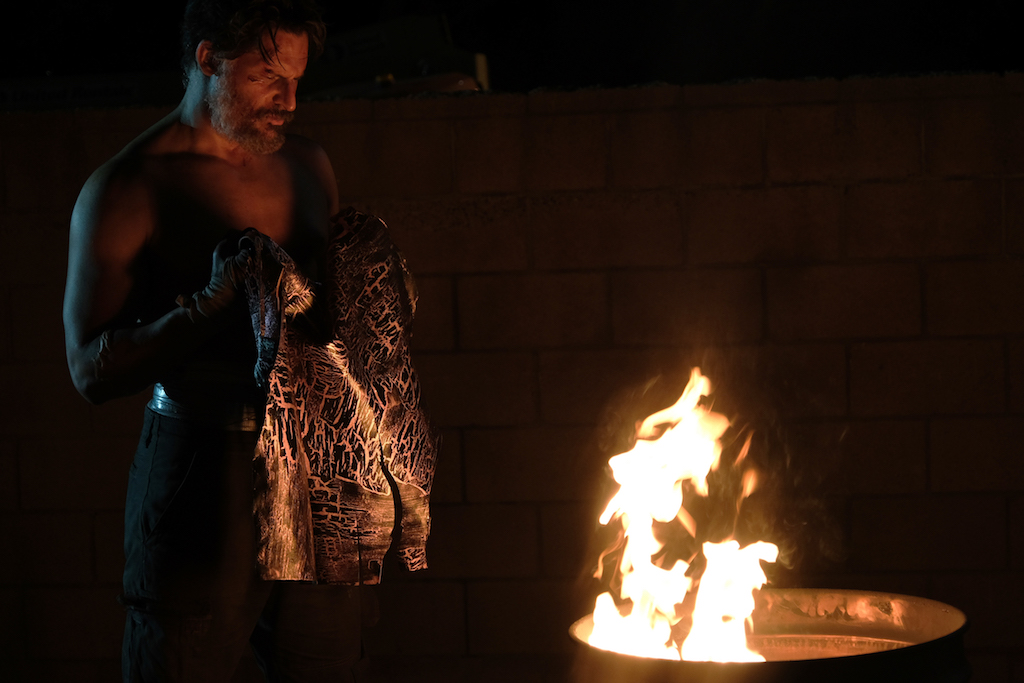 The casting of Amy Seimetz was a surprise.  She’s such a great actress and I feel like she really thrives when working with dark material.  Was she someone you envisioned for the role?

She was someone that I always wanted to work with.  I agree with you, she’s such an incredible actress, probably one of the greatest I’ve had the chance to work with.  My producer (Kim Sherman) had produced her first feature (Sun Don’t Shine), so I kinda asked if she’d be interested.  When I was writing the part she wasn’t the first person I thought of, but when she became available, became a possibility, it was just such a thrill to have her.  The way she’s able to play the evil genius but also bring the emotional reality of her character is just wonderful.

The film isn’t the typical superhero film that we are used to getting.  How do you feel about that genre in general?

Basing films on comic books and on the mythology of what they can do…there’s endless possibilities in that.  I think of how many great movies have been made in Japan based on Manga and how every possible feeling and genre is evoked.  I think there’s a sensibility that they have to feel a certain way.  I don’t think they have to, I think there’s plenty of room for the type of superhero movies we’re seeing to exist, but I’d be more excited to see (where they could go).  You’ve got Chloe Zhao making Eternals for Marvel.  Her movies are so far away from what you think of as being a superhero movie, so I am on the edge of my seat waiting to see what she does with that material.  I’m hoping it’s her movie, and not a “Marvel movie”.  I think it would really enrich our culture if movies did the same type of things with all the different voices you see at any given comic book store.

As you said what Chloe could do with Eternals is exciting.  I loved what Cathy Yan did with Birds of Prey too.

Oh my God, I loved that movie.

Is taking on a big budget Marvel or DC film something you would ever consider?

Oh totally! I’d love to be given some crazy character.  Give me The Demon from DC Comics.  I’ve been reading comic books all my life, so it’s so great to think how you can explore all these weird little pockets of these worlds.  Give me a Jimmy Olsen movie, that would be amazing.  I mean, Hamster in Archenemy has a little of that Jimmy Olsen vibe and there’s still so much we can do with that world.

Given how Archenemy finishes have you considered the possibility of a sequel?

Oh absolutely.  I think what’s great about Archenemy is that it’s a little window into a larger universe.  I have outlines for where exactly I would pick up on how this movie ends.  And also more exploration into the past, and how those elements combine.  I even think it would be great for this film to exist in the same universe as Daniel Isn’t Real so I have a lot to explore if someone would let me.

Our thanks to Adam Egypt Mortimer and STUDIOCANAL Australia.  Archenemy is screening exclusively through Dendy Cinemas from December 10th, 2020.