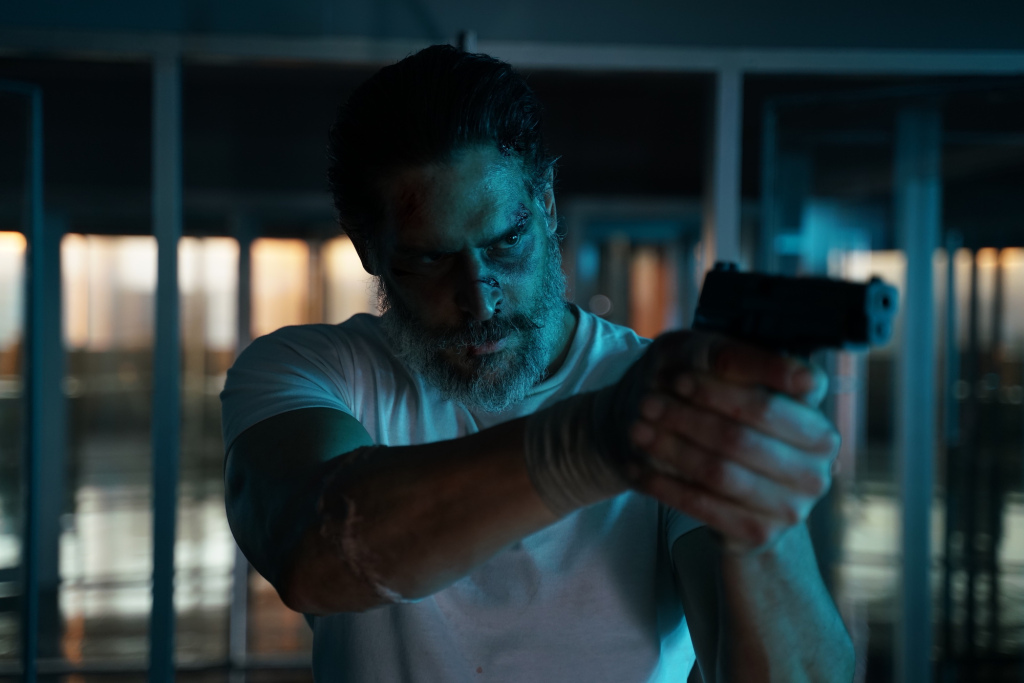 In a time when superhero movies have become such a driving force within the realms of both cinema and pop culture in general, Adam Egypt Mortimer’s Archenemy manages to stand out due to its anti-heroism tale.  Taking a bit of the wind out of the capes of the more traditional comic book players, Archenemy still delivers the narrative you’d expect – backstory, world building, villainous conflict – but Mortimer twists the ingredients just so that there’s a bit of humanity and realism to a very outlandish premise.

Through a stunning animated rendering, Archenemy introduces us to Max Fist (Joe Manganiello), an other-worldly warrior of sorts who, on Earth, appears as anything but.  After being thrown through a multitude of dimensions following battle, Fist lives out his days destitute, rambling to anyone who’ll listen to his wild tales as he swigs back copious amounts of alcohol.

Someone who takes interest in his ramblings is Hamster (Skylan Brooks), an aspiring e-journalist who’s hoping he’ll go viral by showcasing the superhuman abilities of Max, proving that superheroes do indeed exist.  This unlikely duo would’ve been enough for writer/director Mortimer to lay focus on – and you imagine if this was a larger budgeted film it may have opted for this more audience-friendly route – but Archenemy isn’t the type of film that wants to please the general masses, so Hamster’s older sister, Indigo (Zolee Griggs), earns prominence in a parallel plot that sees her caught up with exactly the type of people you don’t want to be associated with.  Her boss, simply known as The Manager (Glenn Howerton), has instructed her to retrieve a significant sum of money from one of his associates (Paul Scheer, in an absolutely wired extended cameo), but when said retrieval goes awry, Indigo lands a target on her back, leading to Max having to step up as the hero we all know he is, even if he doesn’t believe it himself.

And it’s with Max’s own self-doubt that the film continues on its own distinct path, constantly presenting us with a “hero” who never views himself as a saviour in any manner.  He’s aware of how he is perceived on Earth due to his lack of superhero strength, and as disagreeable as he wants to be, through both Mortimer’s writing and Manganiello’s acting he’s a character we can’t help but become engaged with.  Given his hulking stature and rugged looks, it’s quite a surprise that it’s taken this long for Manganiello to headline his own superhero effort.  And though Archenemy doesn’t necessarily give him the big action set pieces that other films of this ilk can afford, he handles his own brute force with a unique sensibility and deadpan humour that plays to the actor’s strength.

Next to Manganiello, Archenemy‘s other main ingredient is the addition of Amy Seimetz.  An all-around chameleon of the industry, Seimetz wouldn’t be the most obvious choice to play a character that can go toe-to-toe with someone like Fist, but she injects a true sense of terror into the role of Cleo, the “big bad” from his home planet who, as we learn, has been waiting with bated breath for their inevitable reunion.  She’s simply delicious in the role, and though Cleo could have easily been written as a standard villain, the emotional connection evident between herself and Fist adds an additional layer to their evidently complex relationship.  The only downside being that the conflict between them is not nearly as built up as it could be, leading their showdown to lose some of the impact it should’ve had.

As he proved with the psychological horror film Daniel Isn’t Real, Mortimer is a filmmaker and storyteller that isn’t afraid to take risks.  Archenemy, though working with an archetypal superhero plot, doesn’t always play to the expected, delighting in its own choices to bend the rules.  Even without the assistance of a large budget Mortimer creates a world with intricacy, and the visual artistry he has fashioned suggest an ambition that many of these multi-million dollar projects lack.

Fans of the traditional superhero aesthetic may not warm to Archenemy – this isn’t Marvel or DC – but for those who appreciate grit, and can swallow a narrative that isn’t solely relying on action to propel itself forward, Mortimer’s bold outing should hopefully find a receptive audience who can appreciate a creative mind that follows through on their big swings.

Max Fist (Joe Manganiello) claims to be a hero from another dimension who fell through time and space to Earth, where he has no powers. No one believes his stories except for a local teen named Hamster. Together, they take to the streets to wipe out the local drug syndicate and its vicious crime boss known as The Manager.