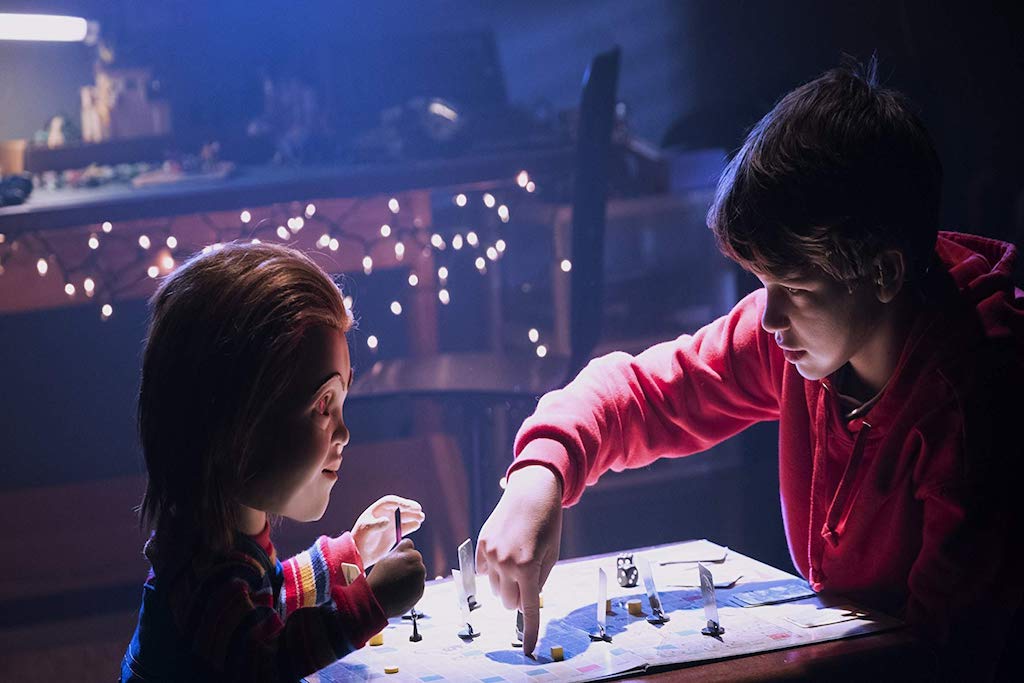 A franchise that’s been steadily pumping out components for over 30 years now, the Child’s Play films have been synonymous with the killer doll horror audiences have come to love: Chucky.  Voiced by character actor Brad Dourif, the psychotic “good guy” doll has maintained his blood-thirsty rampage as recently as 2017 (the straight-to-home market Cult of Chucky being the 7th entrant overall), so it seems particularly unnecessary for this embodiment to exist, given its complete disconnect from the original series that creator Don Mancini is still very much continuing.

Horror remakes in general aren’t always welcomed with an open mind, but it would seem the general public opening their wallets is a different matter, so as much as we can lament over less-than-satisfactory do-overs like 2008’s Prom Night, 2010’s A Nightmare on Elm Street, or 2013’s Carrie, the box office returns speak volumes, so what could it hurt to attempt an update on a horror product that may still be somewhat relevant but hasn’t seen the inside of a cinema since 2004; the darkly comedic Seed of Chucky being the last film of the original series that earned a theatrical release.

Balancing both the more horrific slasher mentality of the original and the black humour the series eventually adopted, 2019’s Child’s Play works with its unhinged charm as it is completely aware of its ridiculous premise.  It doesn’t entirely make a mockery of itself or the genre, but it plays with the tropes we’ve come to expect, resulting in a ludicrously entertaining horror pic that’s genuinely humorous and satisfyingly gory.

Whilst these types of films tend to offer up a series of cardboard cut-outs posing as human beings that we’re supposed to care about but are really just waiting with bated breath to see offed in whichever inventively gory fashion the screenwriters create, here we actually are presented with a pair of characters we like – mother/son duo Karen and Andy Barclay (Aubrey Plaza and Gabriel Bateman).  Life’s unfortunately pretty ordinary for the pair though having moved into a suspicious-looking neighbourhood where Andy knows no-one and Karen is settling for the atypical douche boyfriend.

Hoping to bring Andy out of his funk, Karen brings home a defective Buddi doll, a wi-fi connected toy that acts as a sort of Amazon Echo, but is much, much uglier.  The film makes it a point that this type of doll is “for kids” and Andy’s certainly passed that phase, but he nonetheless bonds with the odd-looking doll, who dubs himself Chucky, because his factory defects means he has some hilarious responses, which in turn helps Andy nab a few neighbourhood kids as his friends.  As Chucky (voiced by a wonderfully off-kilter Mark Hamill) imprints on young Andy and tries to learn about him through his likes and dislikes, he comes to the conclusion that his “best friend” is a fan of all things violent, so he programs himself accordingly; a sequence shows Andy and his friends laughing uproariously at the insane gore of The Texas Chainsaw Massacre 2 which Chucky translates as violence being a proactive solution.

It isn’t long before Chucky is wielding knives and threatening Andy’s cat, offing aforementioned douche boyfriend with a bloody glee, and that creepy building superintendent we notice lurking about the first half of the film? He isn’t getting off easy either (you’ll probably wince at that one).  Tyler Burton Smith’s script certainly knows how to lay out a stalk-and-kill sequence, and it’s these moments that Child’s Play clearly revels in its own nasty temperament.  Chucky himself is, ironically, the film’s most divisive element though as his own appearance is so off-putting that you can’t imagine it being the hot selling item the film wants you to believe it is, and there isn’t much killer motivation behind his bloodlust aside from a disgruntled factory worker turning off the doll’s morality switch.  It works fine enough as a throwaway reasoning as to why Chucky is so evil, but it wouldn’t of hurt to perhaps delve a little deeper.

That being said, as 90 minutes of bloody fluff Child’s Play ’19 is satisfactory viewing for horror fans that like their humour and horror in equal measure.  It’s hollow without question but I can’t deny I had an awful lot of fun, and if you’re willing to surrender to the film’s lunacy you’re likely to enjoy yourself too, even if it’s against your better judgement.

A mother gives her son a toy doll for his birthday, unaware of its more sinister nature.