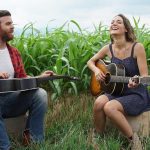 American Folk has been compared to Once (and similarly, its lesser-known cousin, Begin Again) but romantic drama musical genre is as far as the likeness goes. The former films focus on the relationships of the central characters. American Folk, however, places firmly the music, the cultural roots that reach and bind people together during hard times at the heart. ‘Bring back … END_OF_DOCUMENT_TOKEN_TO_BE_REPLACED

Warning - This review contains spoilers Outside In is a slow-paced drama based on an ex-con, Chris adjusting to life out of prison and coming to terms with his relationship with his former high-school teacher, Carol. Jay Duplass and Edie Falco’s performances are stellar. There is a pivotal moment near the end where Carol tells him she doesn’t want a simple life and his heart … END_OF_DOCUMENT_TOKEN_TO_BE_REPLACED