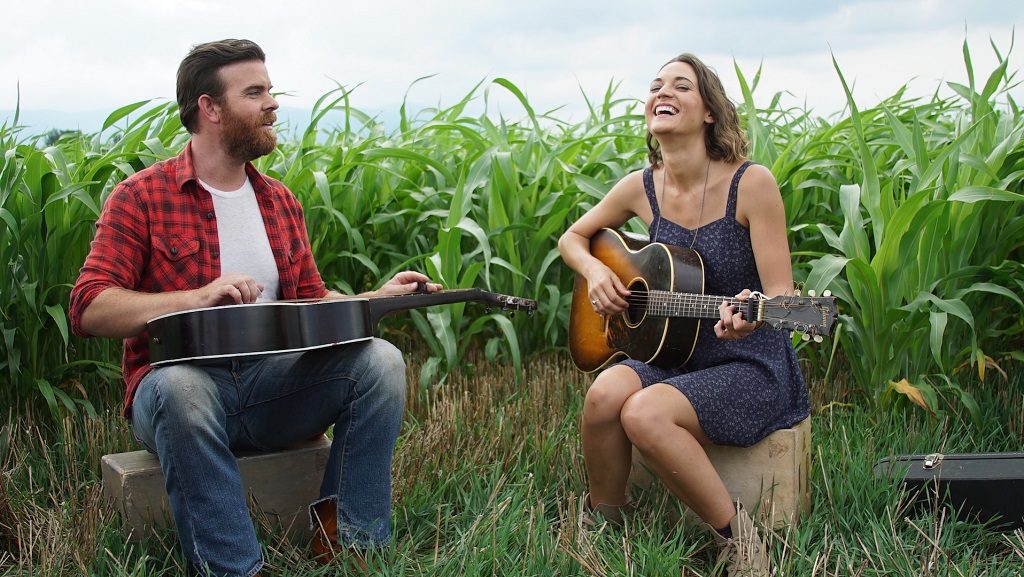 American Folk has been compared to Once (and similarly, its lesser-known cousin, Begin Again) but romantic drama musical genre is as far as the likeness goes. The former films focus on the relationships of the central characters. American Folk, however, places firmly the music, the cultural roots that reach and bind people together during hard times at the heart.

‘Bring back the folk.’ Joni exclaims.

Our story begins with a nonchalant Elliott (Joe Purdy), a struggling musician whose skating on thin ice with his agent. If he misses his next gig in New York, he’ll be busking for the rest of his life. As the plane departs LA, fellow passenger Joni (singer/songwriter, Amber Rubarth) piggy-backs his portable CD player and a new friendship kick-starts. Without words, we get a first glimpse of the theme that resonates throughout this film – ‘the power of music’.

Suddenly the plane trip is aborted and they are deposited back to a frantic LA airport. Here they find themselves in the early minutes and hours following the September 11 terrorist attacks. The filmmakers do not use the news footage to which we’ve been accustomed to relay this; choosing instead sound bites of eyewitnesses (voiced by actors) and Bush to convey the traumatic events.

Now they are desperate to reach New York – Joni’s bed-bound elderly mother requires care and none of her calls are getting through. Elliot’s resolve to rescue his career becomes his number one concern. With no flights in or out, they borrow a van to reach the east coast.

Thrown together with a good 2,000 miles from their destination, there are the usual moments of friction, and there is a minor detour with the introduction of a hitch-hiking pair with their own family drama.

The richness of this film is the real-like characters they encounter along the way which explores a new perspective on what was being felt by Americans across the country in the aftermath of the attacks.

American Folk makes its Australian debut at the American Essentials Film Festival, 9 – 20 May 2018, at Palace Centro. Check the Festival’s website for screening details.