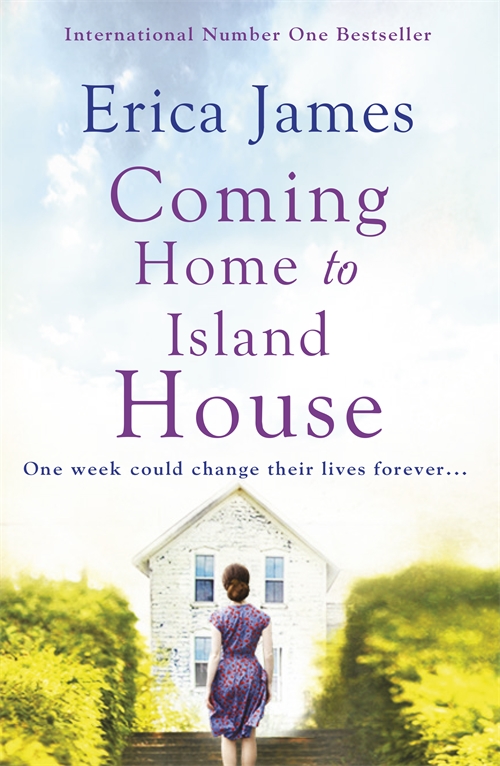 Coming Home to Island House by bestselling author, Erica James, is the story of the Devereux family narrated in two parts.

The first part, “Family”, begins with the arrival of the well-known murder/mystery writer, Romily Temple, returning home to Island House in the village of Melstead St Mary in Suffolk, where she lives with the love of her life, Jack Devereux. When Jack falls ill, the family, from whom he has been estranged for many years, are called home.

Jack has three children, Arthur, Hope, and Kit. His wife, Maud, died after Kit’s birth and Jack was left to bring them up alone. He also rescued his dead brother’s illegitimate daughter, Allegra, from an orphanage in Italy and brought her to live at the family home.

Working hard to build his business empire, he failed them all badly, causing an irreparable rift between them. He realizes he was at fault and wishes to make his peace with them. Will they be able to stay at the house together for one week to try to sort out their grievances?

Romily, a free spirit, who has spent her life thriving on adventure, must cope with these unfamiliar circumstances. Can she win over her stepchildren and bring about the reconciliation that Jack so desires?

It is August 1939 and war is about to be declared.

The second part of the narrative, “The War” follows the fortunes of the family during 1940 telling of love and great happiness as well as loss and unbearable grief.

This is a beautifully written tale of a family at war in so many ways that they will touch your heart. There is also a very well written collection of wonderful characters, such as Mrs Partridge, the cook and housekeeper, Florence, the maid, Stanley, the evacuee from London, Bobby, the dog, and residents of the village, including the unforgettable Miss Gant,  Miss Treadmill, and their pet geese. A great read.

Available in paperback, hardback, and ebook.

Erica James is the author of nineteen bestselling novels, including Gardens of Delight, which won the Romantic Novel of the Year Award and her recent Sunday Times top ten bestseller, The Dandelion Years.

Born Erica Sullivan in 1960 in Surrey, England, she grew up on Hayling Island, Hampshire. Divorced, she has two grown-up sons, Edward and Samuel, and lives between Suffolk and Lake Como in Italy. She began writing after attending a creative writing course at the Arvon Foundation.