You are here: Home / Entertainment / The King’s Witch by Tracy Borman – Book Review 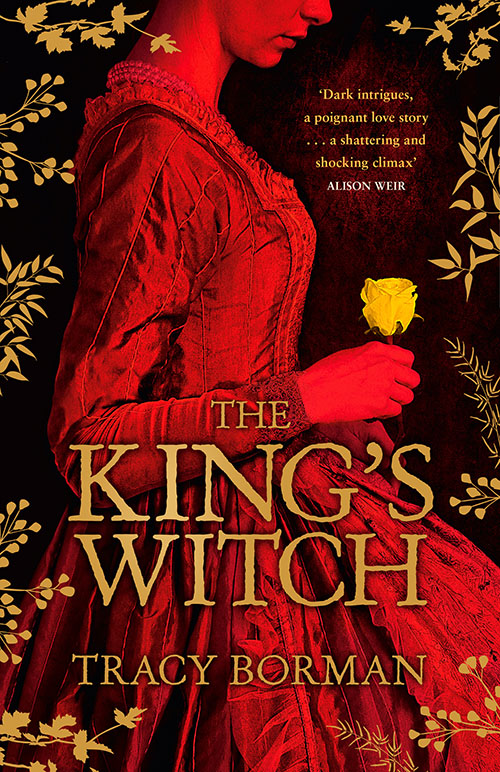 The King’s Witch by Tracy Borman is the first in a trilogy of historical novels set in the early 1600’s at the end of the Tudor reign and the beginning of the Stuart era.

In March 1603 the old Queen, Elizabeth, is dying. She is attended by her ladies, Helena Gorges and her daughter, Frances, who are skilled herbalists and healers. Despite their efforts, the Queen dies in the early hours and James VI of Scotland is proclaimed king later the same day. This is to the great satisfaction of Elizabeth’s chief advisor, Robert Cecil, who has previously sent James a draft proclamation of his accession to the English throne.

Helena and Frances return to the family estate at Longford in the County of Middlesex. Frances hopes to stay there and tend to the gardens that grow the medicinal plants required to make up potions for healing.

Her dreams are dashed when her Uncle, the Earl of Northampton, insists that she return to London. He has arranged for her to take up the position of Lady of the Bedchamber to Princess Elizabeth, King James’ 8-year-old daughter. He also warns her to give up all thoughts of herbal remedies and healing or the King will have her declared a witch.

Frances is soon to learn of the extent of the King’s obsession with eradicating any perceived form of witchcraft. She must tread very carefully as she has an enemy in the Privy Seal, Lord Cecil, who has spies everywhere.

Despite the King’s Puritanism in the treatment of his subjects, Frances is witness to acts of gross debauchery at his court. She realises, however, that she has an ally in James’ wife, Anne of Denmark, who is also repulsed by her husband’s predilections.

Frances is introduced to the courtier, Tom Wintour, who also befriends her. But will this put her in grave danger when she discovers his involvement in one of the most audacious plots in history?

Tracy has expertly crafted the fictional character of Frances and placed her in the court of King James, bringing this turbulent period in history to life. The historical detail is superb and the narrative page turning. It leaves the reader yearning for the second installment.

The King’s Witch is currently available in paperback and hardback.

Tracy Borman is joint Chief Curator of Historic Royal Palaces and Chief Executive of the Heritage Education Trust. She studied and taught history at the University of Hull and was awarded a PhD in 1997. Tracy is the author of a number of highly acclaimed books including The Private Lives of the Tudors: Uncovering the Secrets of Britain’s Greatest Dynasty, Thomas Cromwell: The Untold Story of Henry VIII’s Most Faithful Servant, Matilda: Wife of the Conqueror, First Queen of England, Elizabeth’s Women: The Hidden Story of the Virgin Queen and Witches: A Tale of Sorcery, Scandal and Seduction. Tracy is also a regular broadcaster and public speaker, giving talks on her books across the UK and abroad.