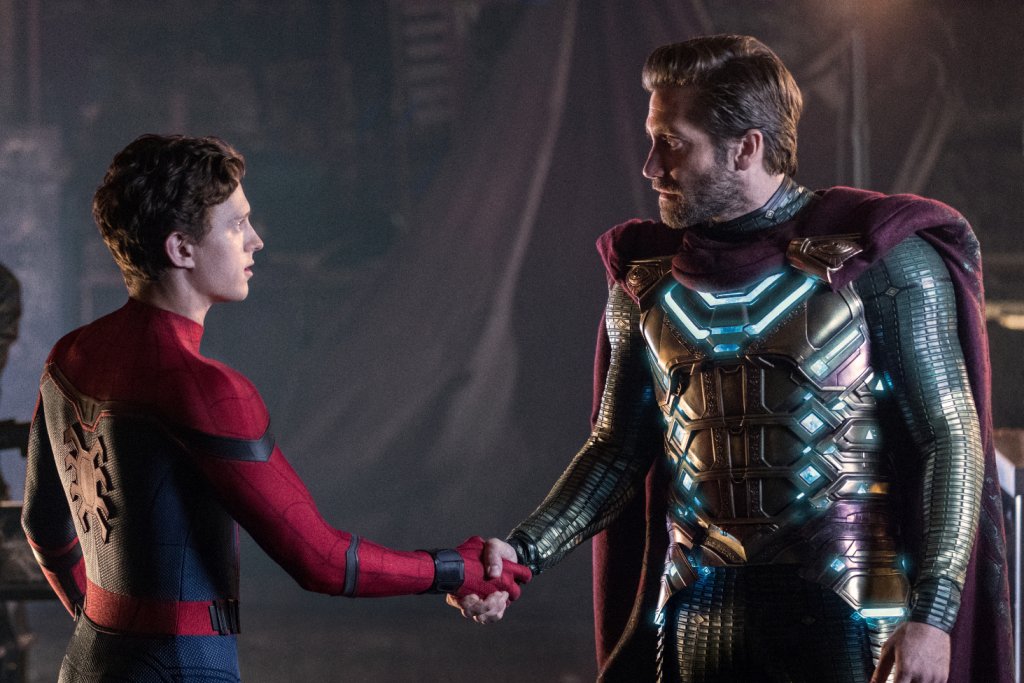 It goes without saying that audience members intent on checking out Spider-Man: Far From Home best be versed in the Marvel canon thus far.  Or at the very least have seen Avengers: Endgame as this sprightly sequel acts as an informative aftermath regarding its arc-altering consequences.

Utilising a convenient plot point in order to reassemble the majority of Spider-Man: Homecoming‘s principal cast, Far From Home informs us that Peter Parker (Tom Holland) and his classmates all fell victim to Thanos’s snap; here, however, it’s referred to as “The Blip”.  Parker, his bestie Ned (Jacob Batalon), hopeful love interest MJ (Zendaya), cocky rival Flash (Tony Revolori), and brainy classmate Betty (Angourie Rice) are the core characters who all fell victim to “The Blip”, and Far From Home, aware of the humourous potential that lays within the questioning of what happens when classmates who didn’t disappear for the 5 year blip play catch-up to their peers, maintains a sense of humour about itself when addressing the consequences.

Leaning towards the lighter side of the MCU rather than gravitating further into emotional depths – similar to how Ant-Man and the Wasp was a welcome breather following Infinity War – Far From Home is “textbook” Marvel with its breezy action and rapid-fire jocularity honouring both the franchise brand as a whole and Spider-Man‘s teen coming-of-age mentality.  Here, director Jon Watts (returning from Homecoming) adopts the Euro-trip teen film vibe, with the more action-heavy moments equally weighed against Parker’s angst in telling MJ how he truly feels about her; Holland and Zendaya’s playful, almost awkward chemistry a true highlight here.

But as much focus as Chris McKenna and Erik Sommers’ script places on Peter Parker as a love-lorn teenager, as well as a particularly amusing side gag regarding a holiday fling for Ned, Far From Home is still very much an action movie, and the introduction of a planet-defeating squadron known as “The Elementals” allows Parker’s European trip to also serve as the fighting ground for Spider-Man and his new ally Mysterio (Jake Gyllenhaal), an Elemental expert who claims to be from another version of Earth, floating the idea that a multi-verse exists as a result of the Avengers altering the timeline in Endgame.

Those well versed in the lore of the Spider-Man films should be aware of the rather amusing notion of Gyllenhaal’s casting here (the actor was almost cast as a replacement for Tobey Maguire in the original Spider-Man sequel before Maguire maintained the role), and though there’s something of a missed opportunity in referencing anything of the sort – especially given the multi-verse theory – he feels very much at home as Mysterio, injecting his usual charm and masculinity into the role; his chemistry with Holland is also particularly endearing, the two bouncing off each other with a genuine affection and enthusiasm.

As is the case with Marvel, if my review seems a little vague on plot specifics it’s because much of what transpires within Far From Home is best left witnessed for yourself.  The staple mid-credit and end credit sequences here are two of the most exciting and plot-changing reveals the MCU have delivered yet, with the future of Spider-Man drastically altered in the former and the potential for significant change to the universe overall discussed in the latter.  Suffice to say, if the tacked on sight of an ant playing the drums in Ant-Man and the Wasp or a cat hocking up a cosmic cube in Captain Marvel started to wear you down on the importance of staying until the very end, Far From Home will reward you for your patience.

As an end to Phase 3 of the MCU, Far From Home hones just enough of that epic action feel we’ve come to expect, as well as sending it out on a comical high.  A swift web sling to the notion that superhero fatigue in cinema has kicked in, this triumphant sequel proves that there’s still excitement and unpredictability to be found in a genre we keep thinking we’ve figured out.

About Spider-Man: Far From Home

Peter Parker returns in Spider-Man™: Far From Home, the next chapter of the Spider-Man™: Homecoming series! Our friendly neighbourhood Super Hero decides to join his best friends Ned, MJ, and the rest of the gang on a European vacation. However, Peter’s plan to leave super heroics behind for a few weeks are quickly scrapped when he begrudgingly agrees to help Nick Fury uncover the mystery of several elemental creature attacks, creating havoc across the continent!

Spider-Man: Far From Home (M) is screening in Australian theatres from July 1st 2019.