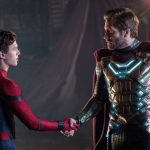 It goes without saying that audience members intent on checking out Spider-Man: Far From Home best be versed in the Marvel canon thus far.  Or at the very least have seen Avengers: Endgame as this sprightly sequel acts as an informative aftermath regarding its arc-altering consequences. Utilising a convenient plot point in order to reassemble the majority of Spider-Man: … END_OF_DOCUMENT_TOKEN_TO_BE_REPLACED