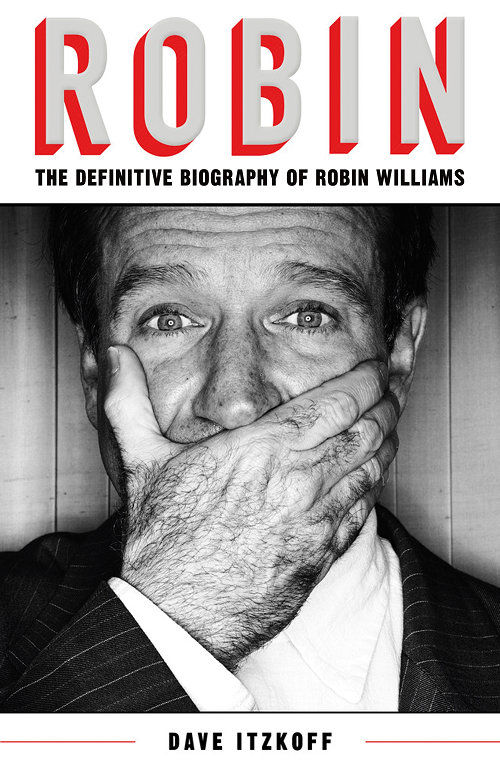 Robin by Dave Itzkoff is the authoritative biography of the brilliant intellect and talent of Robin Williams.

Robin McLaurin Williams was born on July 21st 1951 to Robert Fitz-Gerrell Williams, a national sales executive for the Ford Motor Company in Chicago, and Laurie McLaurin Janin, a former model for Marshall Field’s department store. The young Robin’s mother entertained him with risqué rhymes and jokes. His Father, whom he found somewhat unfathomable, nevertheless introduced him to the various comedy shows of the time.

The family was constantly moved around the country by the Ford Company and Robin changed school many times. At Bloomfield Hills, in the isolated Stoneyfield mansion, he spent much of his time alone in the third-floor attic with his battalions of toy soldiers. Susie, his former nurse and a husband and wife, who worked as servants, looked after him. There he acted out various scenarios with his soldiers giving them all many and varied comic voices, which he would use later in his stand up comedy acts.

After taking a drama course at High School, he told his father that he had decided to become an actor. His father told him to ‘learn a skill, like welding, just in case.’

And so began his drama studies at the College of Marin in Tiburon and the prestigious Julliard School in New York. After failing to get his degree, he returned to San Francisco to his parents and girlfriend. There he began his stand up spots and work with improvisation groups. He cut his teeth in the various comedy clubs, where he learned and honed his craft. His comedic talent and quick-fire humour were popular with the audiences and his reputation was growing. He’d done the hard-yards, now he needed a more permanent role.

His big break came when he was cast in the long-running TV role as Mork in Mork and Mindy. This enormous success was followed by his classic portrayals of characters in movies such as, Good Morning, Vietnam; The Fisher King; Mrs Doubtfire and Good Will Hunting. Itzkoff takes the reader behind the scenes and relates the lesser known truths of Williams’ life as revealed in interviews with family and friends.

In this insightful biography, Itzkoff also writes of Williams’ struggles with insecurity regarding his work, depression, and his addiction to alcohol and drugs. Like many fellow actors and comedians, he suffered from self doubt and the fear that this talent would wane and leave him without an audience.

Tragically, it was an incapacitating and improperly diagnosed condition that brought this compassionate, much-loved comic genius to an end, far too soon.

Initially, at over 400 pages, plus notes and index, Itzkoff’s biography seems rather daunting. The reader will be rewarded, however, by a perceptive and well-researched dissertation of Williams’ life.

Robin is currently in bookshops in paperback.

Dave Itzkoff is the author of Mad as Hell, Cocaine’s Son, and Lads. He is a culture reporter at the New York Times, where he writes regularly about film, television, theatre, music, and popular culture. He previously worked at Spin, Maxim, and Details, and his work has appeared in GQ, Vanity Fair, Wired, and other publications. He lives in New York City.