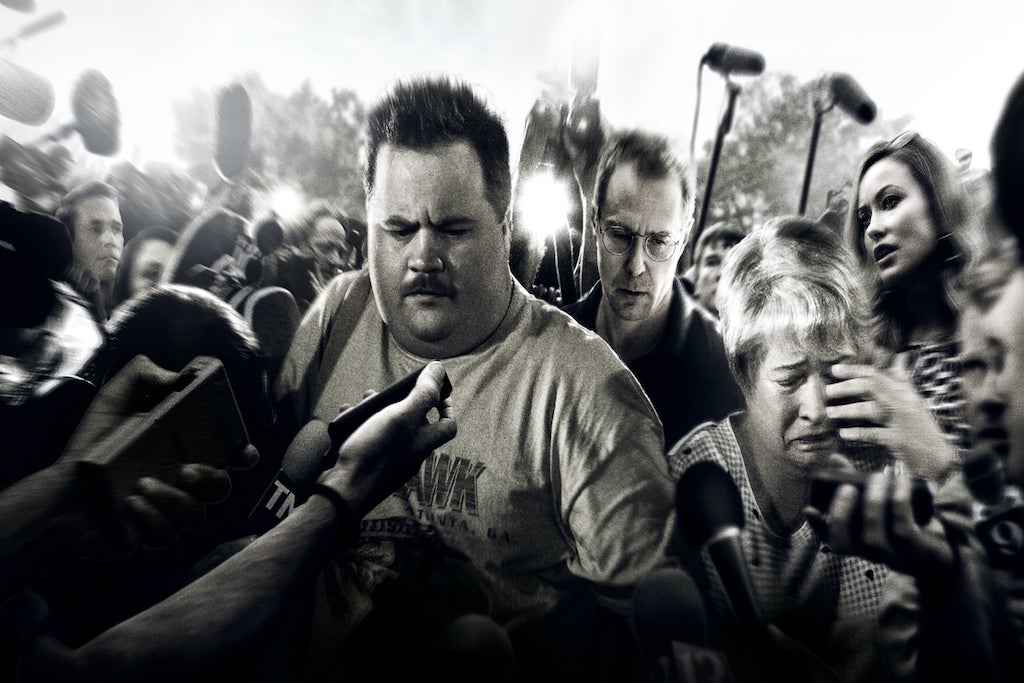 Throughout his directorial career, Clint Eastwood has often subverted the ideals of heroism – specifically American heroism.  From disrupting the view of the Western hero in Unforgiven (1992) to the unlikely saviour of Sully (2016), Eastwood has long dissected the concept of what it means to be a hero, and his experimentation within this process only continues with Richard Jewell.

To say Richard Jewell the person, as played here by Paul Walter Hauser, doesn’t fit the mould of a traditional hero would be a vast understatement.  With his large frame and uncontrollable urge to follow his job description to its most literal wording, Jewell initially comes off as something of a desperate figure who just wants to be liked.  He’s more than aware though of what his various co-workers think of him – whether that be in the small public law firm he starts off in as an office supply clerk or the university he mans as a security guard – and it’s perhaps cause he knows how alone he is that he obsesses even more so over his occupational duties.

For those unfamiliar with just who Richard Jewell is (or was), at the 1996 Olympics in Atlanta, Jewell took note of a suspicious backpack and preemptively starting clearing the surrounding common area.  The policeman on hand naturally were skeptical of Jewell’s suspicions, but when the authorities took to investigating the bag the reality proved his conjecture correct.  The area was ultimately evacuated enough that when the pipe-bomb constructed inside detonated only 1 person was directly claimed as a casualty; 111 people were injured in total.

Initially, Jewell was labelled a hero, but as the narrative moves forward under the pen of screenwriter Billy Ray (who has an eclectic back catalogue to his name, ranging from the trashy 90’s Bruce Willis sex thriller Colour Of Night and the Tommy Lee Jones disaster flick Volcano to the first Hunger Games outing and the lauded Captain Phillips), the FBI were notified by a former employer on how obsessive he was regarding his security work, which in turn paints Jewell as a man who would go out of his way to “do the right thing” i.e. purposely plant a bomb just so he could discover it and save the day.

This narrative is one cut-throat journalist Kathy Scruggs (Olivia Wilde) runs with, publishing the story and instantly flipping Jewell’s heroic stance into that of a villain.  Jewell is baffled – Hauser’s performance is riddled with a naivety that’s equally endearing as it is frustrating – and in his best attempt to clear his name, and to handle both the media storm that comes his way and the FBI agents who fail to investigate anyone else, he turns to Watson Bryant (Sam Rockwell, breaking stereotype with a far more stripped back turn), an attorney from his past that he formed something of a rapport with.

Whilst the film could easily be described as Eastwood’s takedown of the “fake news media” environment we unfortunately currently exist in, he chooses to adopt a far more subtle mentality regarding the media and the downward spiral that comes with it.  Eastwood wisely never links any of the narrative to a particular political view, and it’s only through the somewhat problematic depiction of Scruggs that Richard Jewell suffers; the script paints her as particularly heartless and suggests she isn’t above performing sexual favours for the benefit of a story, however Wilde’s performance is heightened just enough that her character never derails the film.

On the mention of Wilde’s performance, it’s the cast assembled here that truly elevate Eastwood’s film as a whole.  Kathy Bates, whose performance as Jewell’s supportive mother has seen her a permanent fixture throughout the award season, is heartbreaking in her organic ability to project the right amount of  sentimentality, and Jon Hamm is equal parts stoic and assured as the FBI agent leading the case against Jewell, evidently unwavering in his belief that his suspect is unequivocally guilty – despite the lack of concrete evidence.

But it’s Hauser that owns the film.  With a lack of A-list baggage that only adds to his effectiveness in embodying the character (Jonah Hill was originally circling the film back in 2014 when it was first announced; he would ultimately stay on as a producer alongside Leonardo DiCaprio), Hauser’s performance is embedded so greatly with nuances, both comedically and dramatically, that, at times, the devastation surrounding his character is almost too great to bear.

“There is a bomb in Centennial Park. You have thirty minutes.” The world is first introduced to Richard Jewell as the security guard who reports finding the device at the 1996 Atlanta bombing—his report making him a hero whose swift actions save countless lives. But within days, the law enforcement wannabe becomes the FBI’s number one suspect, vilified by press and public alike, his life ripped apart. Reaching out to independent, anti-establishment attorney Watson Bryant, Jewell staunchly professes his innocence. But Bryant finds he is out of his depth as he fights the combined powers of the FBI, GBI and APD to clear his client’s name, while keeping Richard from trusting the very people trying to destroy him.