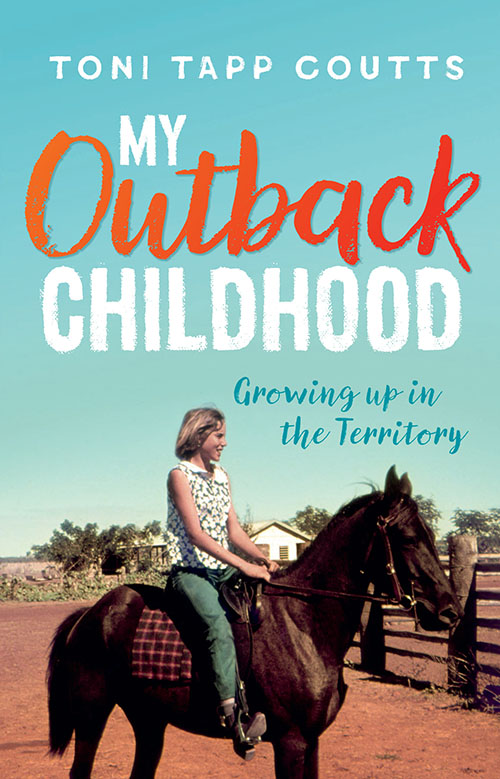 My Outback Childhood by Toni Tapp Coutts is a children’s book, suitable for those of seven years upwards. Her first memoir (for adults), “A Sunburnt Childhood”, was published in 2016 and became an Australian bestseller.

In 1955 Toni was born in Alice Springs, followed by a brother, Billy, in 1957 and a sister, Shing, in 1960. When Toni was five her mum, June, decided to leave Alice Springs and her husband. She took the children to live with her mother, Gladys, in Katherine, 1,200kms to the north.

There she met Bill Tapp, who was born in Sydney to a wealthy family and attended a private school. But, after reading the book, “The Cattle King”, about Sir Sidney Kidman, who left home at 13 and built an empire of cattle stations across northern Australia, Bill decided this too would become HIS dream. On finishing school, in 1947, he got work on a cattle property near Mataranka, 400kms from Darwin. By 1960 he had sufficient funds to buy his own property. He bought the title to a cattle station in the Northern Territory, named Killarney.

In 1961 he asked June to marry him, and the family moved from Katherine 270kms to Killarney. June hadn’t considered that life there would be very different to that in Katherine and was horrified to find that her new home was a rickety shed! Their toilet was a squat behind a tree and meals were cooked in a camp oven in a hole in the ground with hot coals on top. And so the adventure began! For Toni and her siblings it was a hard, but wonderful life. They ran wild in the bush, rode horses, mustered cattle, and swam in the dams and waterholes. But, best of all, they were taught how to survive and to appreciate the spirit of the land by Dora and Daisy, Aboriginal women, who became family.

This is a wonderful, interesting read for children and adults alike. Toni’s description of her childhood on Killarney station brings a vivid insight into life in the territory in the 60’s.

My Outback Childhood is a must-read for the modern child, who should be aware of a different way of life that is still out there to be experienced, as is an environment that will amaze and enthrall.

Toni Tapp Coutts was born and raised in the Northern Territory and has had a varied career. She has lived on cattle stations, ridden in campdrafts and barrel races, owned her own variety store in outback Borroloola and a clothes boutique in Katherine.

A mother of three, she lives in Katherine with her husband, Shaun.