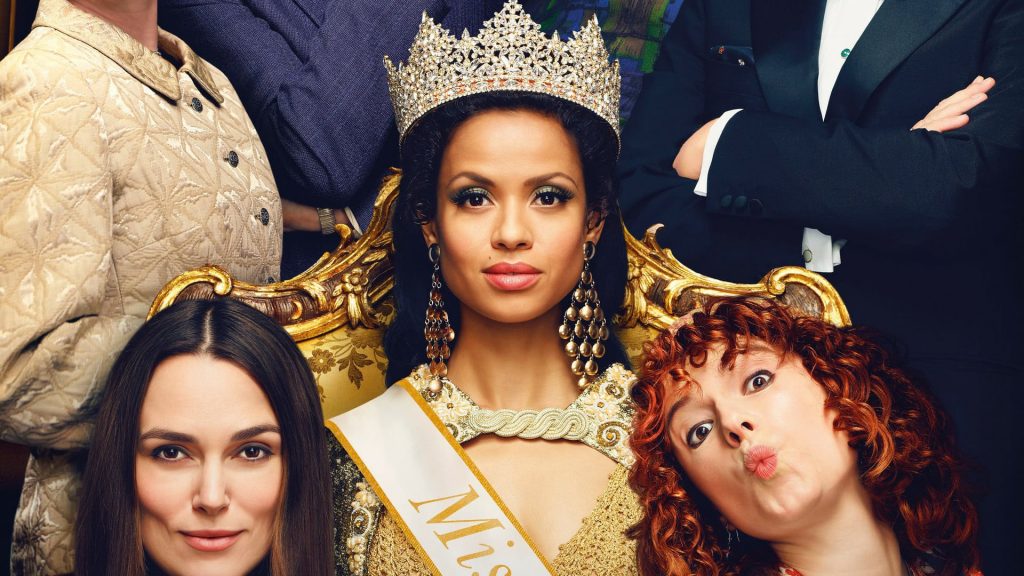 Following up her acclaimed but little seen 2016 family adventure film Swallows and Amazons, not to mention her plethora of television directing work on The Crown and Call the Midwife, filmmaker Phillipa Lowthorpe resurrects the origins of the UK Women’s Liberation movement for Misbehaviour.

Detailing a story that’s worthy of a longer format than the 106 minutes it’s afforded here, Misbehaviour notes a time in history when the world couldn’t help but watch as feminists took charge of the media through an event they knew would earn the most eyeballs – the 1970 Miss World pageant.  Whilst the Gaby Chiappe/Rebecca Frayn-penned script dabbles in cliched narrative beats and doesn’t always give the character focus some players deserve, Misbehaviour still tells an important story, one that sadly still holds relevance and weight in 2020.

Keira Knightley, an actress no stranger to a period piece and encompassing a strong female temperament, stars as Sally Alexander, an historian looking to go back to school.  When we meet her she’s settling in for the interview process, which equates to little more than a sexist-minded male board who are more interested in her beauty than her brains; it’s “a seat at the table” for her, though it soon becomes evident that she’s more in a high chair than a position of any worth when she’s accepted.

At a women’s movement meeting she meets the fiery Jo Robinson (Jessie Buckley), a hot-headed feminist who has a much more direct approach to her ideals as compared to the quieter, more intellectual Sally, and their first interaction suggests anything but an amicable relationship will form.  Realising that contacting the media will be the most viable way for their message of equality and inclusion to be heard, Sally, Jo and her cohorts decide that the Miss World pageant will prove an ample stage for their protests to be noticed.

As much as their actions would have an impact on the movement, the film wisely details the other side of the pageant, a program embroiled in its own share of turmoil as the pageant organisers (Rhys Ifans and Keeley Hawes) were under pressure to include a woman of colour from South Africa.  As much as the women’s movement is topical fodder and proves to be investing, Misbehaviour finds just as much interest, if not more, in the side arcs relating to the Swedish and Carribean contestants; Miss Sweden (Clara Rosager) feeling the pressure of being the favourite to win offsetting her indifference to actually competing, whilst Miss Grenada (Gugu Mbatha-Raw) ultimately defies tradition with an historic win that, sadly, didn’t break the glass ceiling as forcefully as one might expect, but at the very least symbolised the change the world needed to embrace regarding the prominence of women of colour.

Though the film is guilty of falling on clunky additives that are almost comically expected – are we surprised to hear Aretha Franklin’s anthem “Respect” belted out here? – there’s enough meaningful content to counteract this, not to mention a plethora of inviting performances that constantly keep the film afloat.  Knightley and Buckley are expectedly serviceable in their ablazed roles, Mbatha-Raw is quietly powerful (look for scene with Knightley when the two meet by chance following her shock win), and the one-two punch of a lecherous Greg Kinnear and a stern Lesley Manville as showman Bob Hope and his tolerating wife overthrow what could’ve been rather one dimensional outlines and transform them into realised portrayals of the mind-set that needed to change in order for the women’s movement to truly advance forward.

In 1970, the Miss World competition took place in London, hosted by US comedy legend, Bob Hope. At the time, Miss World was the most-watched TV show on the planet with over 100 million viewers. Claiming that beauty competitions demeaned women, the newly formed Women’s Liberation Movement achieved overnight fame by invading the stage and disrupting the live broadcast of the competition. Not only that, when the show resumed, the result caused uproar: the winner was not the Swedish favourite but Miss Grenada, the first black woman to be crowned Miss World. In a matter of hours, a global audience had witnessed the patriarchy driven from the stage and the Western ideal of beauty turned on its head.

Misbehaviour (M) is screening as part of this year’s British Film Festival (10th – 29th November 2020).  For more information and session times click here. It will be released nationally on November 26th 2020.