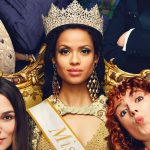 Following up her acclaimed but little seen 2016 family adventure film Swallows and Amazons, not to mention her plethora of television directing work on The Crown and Call the Midwife, filmmaker Phillipa Lowthorpe resurrects the origins of the UK Women's Liberation movement for Misbehaviour. Detailing a story that's worthy of a longer format than the 106 minutes it's afforded … END_OF_DOCUMENT_TOKEN_TO_BE_REPLACED