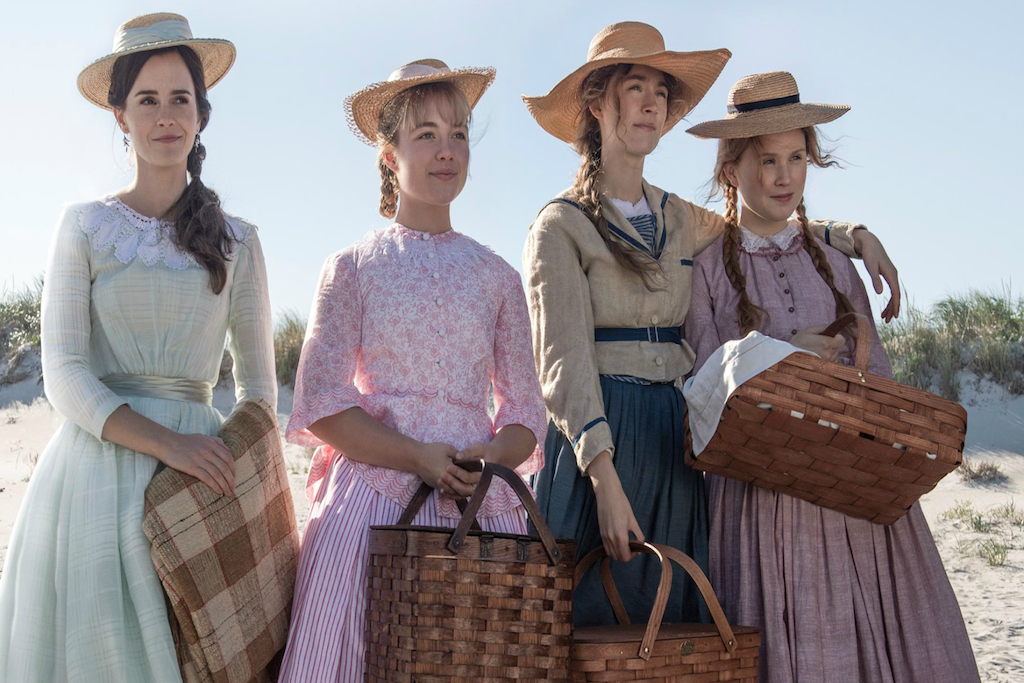 For a story that’s over 150 years old, it’s remarkable how Louisa May Alcott’s Little Women feels so incredibly relevant in today’s climate.  A tale rich in females discovering their own voices and how to navigate their existence separate from what society expects of them, writer/director Greta Gerwig faithfully adapts Alcott’s words whilst maintaining her own unique view, resulting in a sharp, emotional, and often funny feature that very much harnesses its own identity despite the story’s familiarities.

Though Gerwig has retained many of the childhood hijinks the titular women indulged in – living room plays and unfortunate hair burning incidences, to name but a few – there’s a more adult mentality laced over the adapted script.  When the film focuses on the March sisters in their older states, Little Women is decidedly emotional as we witness each of them grappling with their own identity.  Eldest sister Meg (Emma Watson, fine if a little pedestrian), always eager to please, struggles with her social status among other well-to-do wives; defiant Jo (Saoirse Ronan) is torn between her desires to be a writer and the societal pressure to be a wife and mother; and Amy (Florence Pugh, a standout), placing pressure on herself regarding her artist aspirations, understands her role-to-be in a marriage she’s awaiting; the deathly health issues surrounding youngest sister Beth (Australian actress Eliza Scanlen) essentially sidelines her for the majority of the 135 minute running time, her bed-ridden state and childhood shyness occasionally breaking through when the story feels the need to tap an emotional trope.

Speaking of Pugh, the English talent proves Oscar-worthy in her role as arguably the one sister whose personality is the most difficult to convey with sympathy.  Amy is quite often remembered for her bratty tantrums and spoiled conflict with Jo, and in writing her this way Alcott essentially shortchanged the poor girl.  It’s a testament then to both Gerwig and Pugh that the character transcends her volatile temperament, writing her as a woman who’s actions we may not condone but completely understand.  Pugh’s ability to bring out the film’s biggest laughs whilst simultaneously supplying dimension to even her most shallow moments only further solidifies her clout as both a talent to watch and Little Women‘s strongest ingredient – no easy feat in an ensemble that also includes proven powerhouses as Laura Dern (as the March matriarch), Chris Cooper (as a kindly neighbour), and Meryl Streep (as a wealthy aunt).

Whilst the film itself is at times devastating – the love story between Jo and rich boy next door Laurie (Timothee Chalamet) is proper heartbreaking – and Gerwig throughout stretches her emotional muscle to the grandest of effects, occasionally the film falters due to its own ambitious nature.  The decision to unfold the film non-chronologically means the story is constantly bouncing within a 7-year period, and though it becomes apparent which time frame we are in when particular events and/or conversations are taking place, initially it comes off as confusing when it’s only the briefest of moments mentioned and the girls’ appearance is hardly altered enough to determine their age.  It isn’t enough to derail the picture, and this choice allows certain emotional set-pieces to resonate in a stronger manner, but in a film that feels so intricately and delicately made, it’s a jarring ingredient that momentarily stifles its rhythm.

All that being said, Little Women is an absolute joy.  Gerwig has found new, exciting ways to convey a tried and true story, showcasing the importance of the female voice both on and off the screen.  This is uplifting cinema at its most pure.

Writer-director Greta Gerwig (Lady Bird) has crafted a Little Women that draws on both the classic novel and the writings of Louisa May Alcott, and unfolds as the author’s alter ego, Jo March, reflects back and forth on her fictional life. In Gerwig’s take, the beloved story of the March sisters – four young women each determined to live life on her own terms – is both timeless and timely.