You are here: Home / Entertainment / Books / Lenny’s Book Of Everything by Karen Foxlee – Book Review 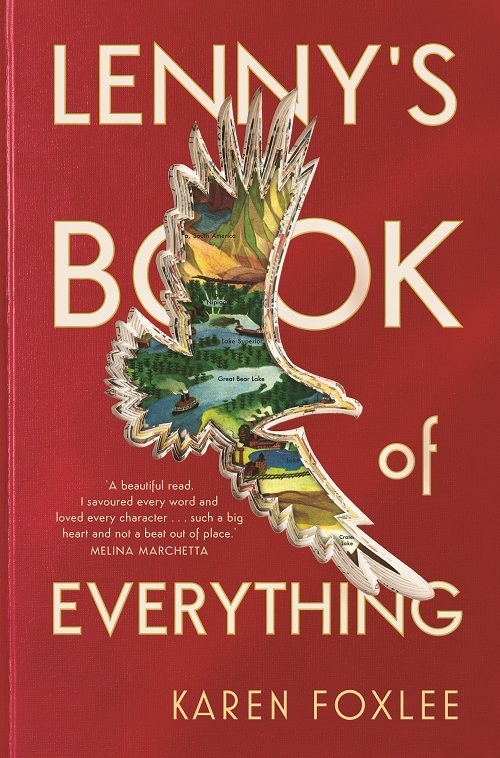 Lenny’s Book of Everything by Karen Foxlee is an outstanding novel by this award-winning author. It tells of Lenny, her mother, Cynthia, and younger brother, Davey, the boy who just can’t stop growing!

Their father, Peter Lenard Spink, left the day before Davey’s 5th Birthday when Lenny was 8 years old. To make ends meet Cynthia works at the Golden Living Retirement Home. Lenny and Davey are minded by their neighbour, Mrs Gaspar, who also makes sure that Lenny attends school. She is a colourful character, who is deeply religious, has a shrine to Apollo 11, weird and wonderful dreams and two Pomeranian dogs named Karl and Karla.

When Cynthia wins a Build-it-at-home Encyclopaedia set, the arrival of an issue every week becomes the highlight of the family’s week. The “B” issues begin Lenny’s love of “Beetles” and “Birds of Prey” inspires Davey’s imaginary Golden Eagle, Timothy. When the “C’s” arrive the children discover the Great Bear Lake in Canada and they resolve to run away and build a log cabin on the shore.

Lenny, desperate to find a link to her father, discovers Great-aunt Em, but is Em who she professes to be?

As Davey continues to grow and his health deteriorates will they ever make it to Great Bear Lake?

Lenny’s Book of Everything is classified as a children’s book, ages 10-14, but it is a book that will be enjoyed and treasured by all ages. It was acquired by Allen and Unwin after a fiercely competitive 7-way auction, which was rightly justified. Although Karen is Australian, she has said that it felt right to set the characters in the US and this is spot on! It is one of the very few novels that stir the emotions of both deep joy and immense sadness. It is THE must-read of the year!

Lenny’s Book of Everything is available in hardback and paperback.

Karen Foxlee is an Australian author who writes for both kids and grown-ups. Her first novel The Anatomy of Wings won numerous awards including the Dobbie Award and the Commonwealth Writers’ Prize for Best First Book. Ophelia and the Marvellous Boy, Karen’s first novel for children, was published internationally to much acclaim while her second novel for younger readers, A Most Magical Girl, won the Readings Children’s Fiction Prize in 2017 and was CBCA shortlisted the same year.

Karen lives in South East Queensland with her daughter and several animals, including two wicked parrots, who frequently eat parts of her laptop when she isn’t looking. Her passions are her daughter, writing, day-dreaming, baking, running and swimming in the sea.