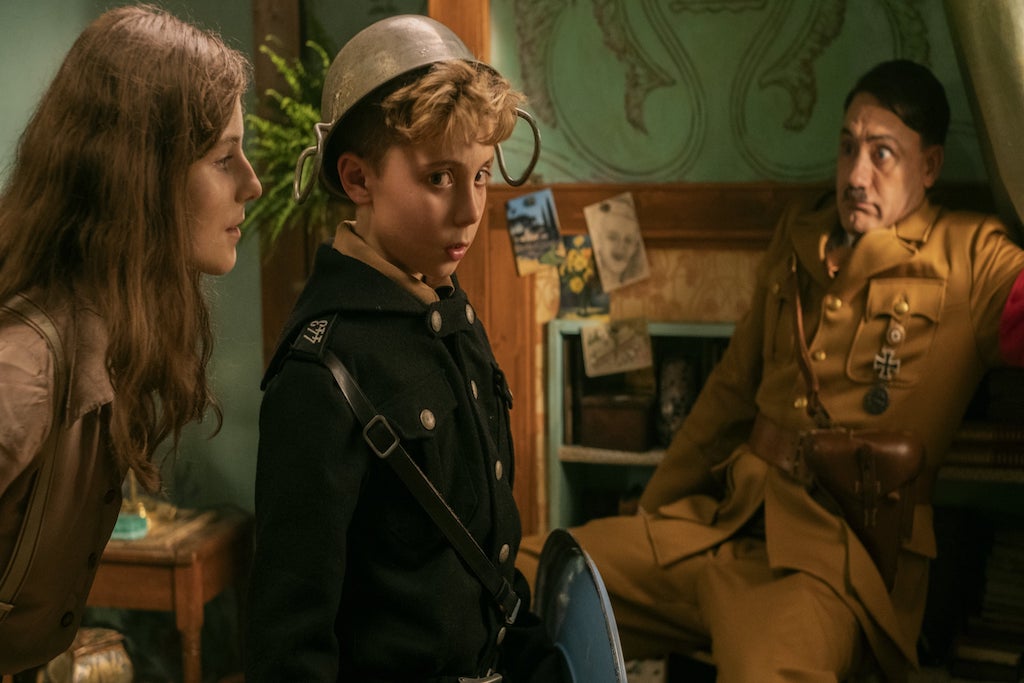 Jojo Rabbit must’ve been a hard sell.  Nazi-themed humour isn’t the easiest to execute in a successful manner, and in a political climate of far-right diplomacy, to ask an audience to sympathise with a Hitler-enthused child is sheer madness.  But such is the brilliance of writer/director Taika Waititi, Jojo Rabbit blends his brand of dark humour with a charming candidness that softens the lunacy we see before us.

In a stunning debut performance (one that has rightfully garnered a recent Golden Globe nomination for Best Actor in a Comedy) Roman Griffin Davis stars as the titular Jojo, full name Johannes Betzler, a wide-eyed, moppy-blonde haired 10-year-old whose angelic looks are offset by his love for all things Hitler; he even has an imaginary friend in the form of the Der Fuehrer himself, a rather camp incarnation played by Waititi (of course).  Jojo’s mother, the kindly Rosie (Scarlett Johansson, radiating warmth in a surprisingly small turn) doesn’t share his enthusiasm however, though she would never voice that directly, instead hoping her more quiet approach in changing his views will suffice; she often takes him past the town square where “traitors” have been hung in a public forum.

Rosie’s defiance against the regime reveals itself gradually within the film’s 108 minute running time to both us as an audience and to her one-minded son, meaning her harbouring a young Jewish girl, Elsa (the lovely Thomasin McKenzie), comes respectively as both expected and a shock.  Jojo’s view of the world collapses when he meets Elsa, forcing the young boy to reevaluate an idealised version of power that may not be the driving force in his existence that he once thought.

Waititi’s decision to project Jojo Rabbit‘s narrative through the eyes of its child protagonist make the film’s choice to fuse off-kilter humour with the horrific recognition of war all the easier to swallow.  And whilst the criticism aimed at the film regarding its comedic view of Nazis is understandable, in no way is Waititi making light of one of history’s darkest moments, more he’s highlighting the absurdity of war, the unjust brainwashing that came with training children, and that evil seldom prevails.  Similarly, any of the film’s villainous characters (including Stephen Merchant’s Gestapo agent) are presented as intentionally one-dimensional, leaving the heroic counterparts as the characters Waititi offers emotional complexity to, further driving home how Jojo Rabbit isn’t here as a platform for Nazis.

As psychologically involved as the film is, Jojo Rabbit is no-less hilarious, with Waititi’s signature left-of-centre jocularity a consistent presence throughout; Sam Rockwell is particularly grand as a one-eyed Captain who runs a Hitler youth camp, the actor bringing his usual redemptive qualities to a near-cartoonish role that gradually forms into a more dimensional character over the film’s course.  And much like Rockwell’s turn, the film itself starts off wild before settling into a softer mindset, though it never sacrifices its identity in the process.  A cosy surprise of a film that reiterates the importance of compassion in the face of adversity, Jojo Rabbit is the beacon of light we all need in our climate right now.

Writer director Taika Waititi (THOR: RAGNAROK, HUNT FOR THE WILDERPEOPLE), brings his signature style of humor and pathos to his latest film, JOJO RABBIT, a World War II satire that follows a lonely German boy (Roman Griffin Davis as JoJo) whose world view is turned upside down when he discovers his single mother (Scarlett Johansson) is hiding a young Jewish girl (Thomasin McKenzie) in their attic. Aided only by his idiotic imaginary friend, Adolf Hitler (Taika Waititi), Jojo must confront his blind nationalism.