You are here: Home / Interviews / Interview with Phoebe Russell from the QSO 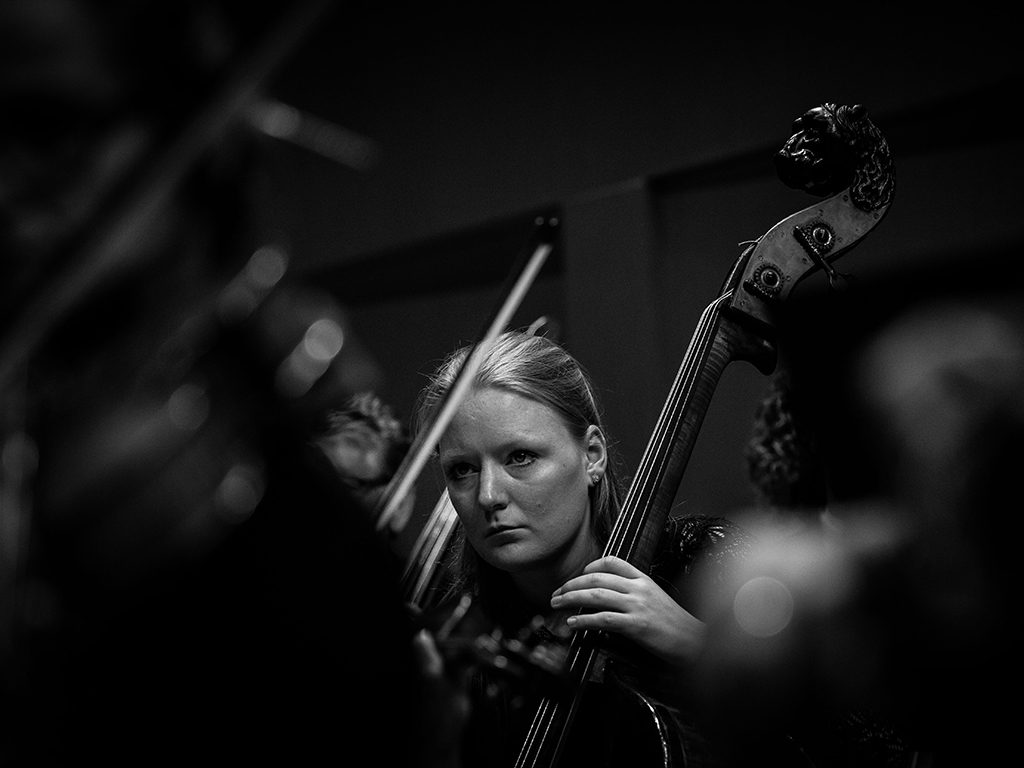 We recently caught up with Phoebe Russell, a Principal Double Bass from Queensland Symphony Orchestra (QSO), who kindly gave us an exclusive interview:

What motivated you to learn the double bass?

I always wanted to play the harp because I found it so beautiful and elegant. We had a grade 2 string program at my primary school. I was so excited about getting to learn the harp and was gravely disappointed to hear that there wasn’t one in the string program. The teacher of the string program told me that I may find the double bass similar and after winning an arm wrestle with three of the boys in my class I was awarded the double bass. It helped that my Mum had a station wagon.

What’s the history behind the Lionhead Double Bass?

The lion head double bass is actually 3rd generation QSO. It was originally bought by Taras Kostynuik in Berlin in the 1940s and was brought to play in the QSO. John Fardon bought the bass from him in 1986 and played it for the following 30 years as principal bass in the QSO. Due to John’s incredible generosity, I am able to have the privilege of playing the bass in orchestra myself and it would be my dream for the orchestra to one day own this piece of history so it can be played in the QSO for generations to come.

The lion head has become an integral part of QSO and many audience members stop me in the street to ask about it and love to come up to the edge of the stage at interval to have a closer look.

What do you love about playing for QSO?

My favourite thing about the orchestra is my section. It’s quite rare to find a group of people so dedicated to working to their highest level artistically and to get along so well amongst themselves. When we are in our element, I feel as if we work as a single unit, an undercurrent, carrying the rest of the orchestra and letting the melodies float effortlessly on top. 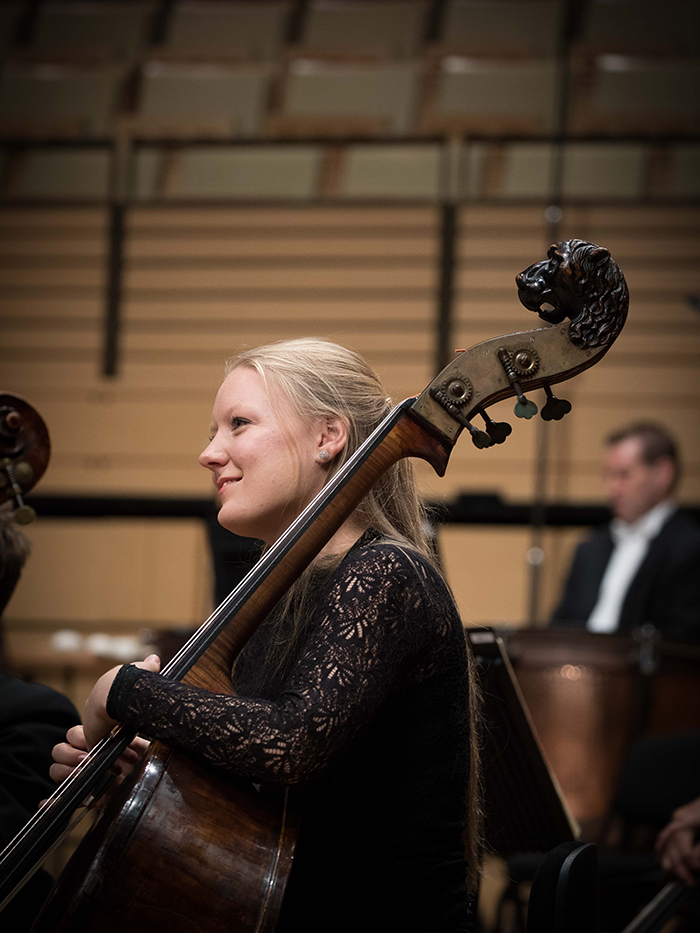 What are some of your favourite pieces?

I wouldn’t say I have a favourite piece of music because it really depends entirely on my mood and the time of day. There are pieces of music that I hold close to my heart because of the memories attached. When I was 14 years old I played in my first big Symphony orchestra at the Australian National Academy of Music (where I later studied.) I had the chance to sit with my teacher, Damien Eckersley and the section was led by his former teacher. Does that make him my grand teacher?

Anyway, we played Ein HeldenLeben (A Hero’s life) by Richard Strauss. Strauss was so obsessed with himself that the hero of the story is actually himself. It is such an epic piece with much for the bass to play.
In terms of pieces that are most rewarding to play, I would say I have a soft spot for Beethoven 7, pretty much any Beethoven actually!

What do you love about playing as part of an orchestra?

I love the feeling of being part of something bigger. I find it almost spiritual that a group of 80+ individual musicians and people choose to give up their own inhibitions and make music as one as part of a bigger reason than themselves. There is nothing more fun than playing a huge piece of repertoire and looking up and seeing your friends having a great time.

What is your favourite music to listen to when at home?

When I get home from a long day of rehearsal and practice, sometimes I just want a bit of quiet time or to listen to something totally different. I need to switch off and play with my dog!

What is one track that never gets old for you no matter how many times you hear it?

‘Tosca’ by Puccini. My husband, Bernardo Alviz spent several years playing with State Opera in Berlin which meant free tickets for me! The first time I heard them play Tosca with the singers from La Scala, I was so enraptured by the music. I ended up going to three performances in a row. I was so astounded by the wall of sound that these opera singers produce and fell in love with the opera for life. Every time I fly internationally, I have the chance to sit down and listen to an opera in its entirety. 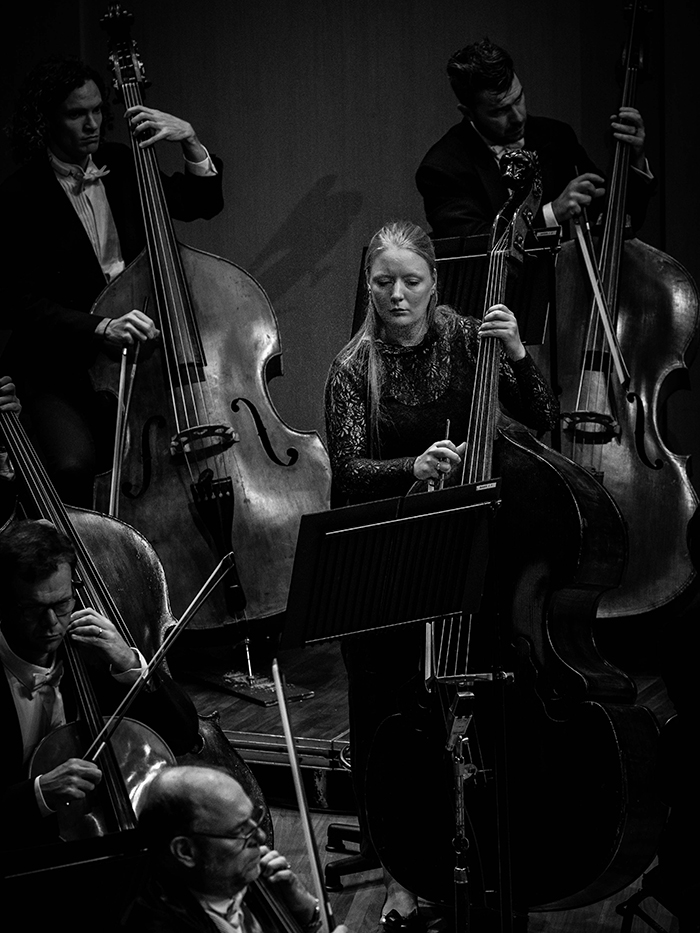 What has been your proudest moment?

My whole life I dreamt of playing at Carnegie Hall.  I was always enamoured by the beautiful and bustling city of New York. In 2014, I had to chance to tour with Berlin Philharmonic to New York City as part of their Carnegie Hall residency. My Mum flew over to watch me play at Carnegie Hall for the first time as part of the season-opening! It is always even more special playing with my family in the audience.

Anyone that plays from their heart and can honestly convey their feelings through their instrument inspires me. Honesty to the music and authentic artistic expression is number one!

Phoebe Russell returned home to Australia in 2017 to take up the position of Principal Double Bass with Queensland Symphony Orchestra.

She was 17 years old when she settled in Berlin and within months made her debut in the double bass section of the Berlin Philharmonic. Since then she has performed in more than 20 countries across the globe with leading orchestras including the Mahler Chamber Orchestra, the Bavarian Radio Symphony Orchestra, the Berlin Radio Symphony, Deutsches Symphonie Orchester, and the Netherlands Philharmonic Orchestra among others.

In 2012, Phoebe was an Australian Chamber Orchestra ‘Emerging Artist’. The Melbourne-born musician spent two years as a scholarship recipient of the Berlin Philharmonic’s prestigious Karajan Orchestra Academy (2013 to 2015). She was a bachelor student at the Hanns Eisler University of Music in Berlin. Phoebe is also an alumna of the Australian National Academy of Music where she completed a professional performance program in 2011 under the guidance of Damien Eckersley.

In 2015, she performed as recitalist to a full house in the Berlin Philharmonic’s lunchtime series.  A few months later, she won the conductor’s prize for the best concerto in the 2016 Carl Flesch Akademie Concerto competition, performing Giovanni Bottesini’s second concerto with the Baden Baden Philharmonic. Phoebe has appeared as a soloist, both at home and abroad, with orchestras that include the Tasmanian Symphony Orchestra, the Baden Baden Philharmonic Orchestra, the Zelman Symphony Orchestra and the Melbourne Youth Strings Orchestra.

She has also studied with the internationally famed double bassist Gary Karr in Canada and cites him as one of her inspirations.