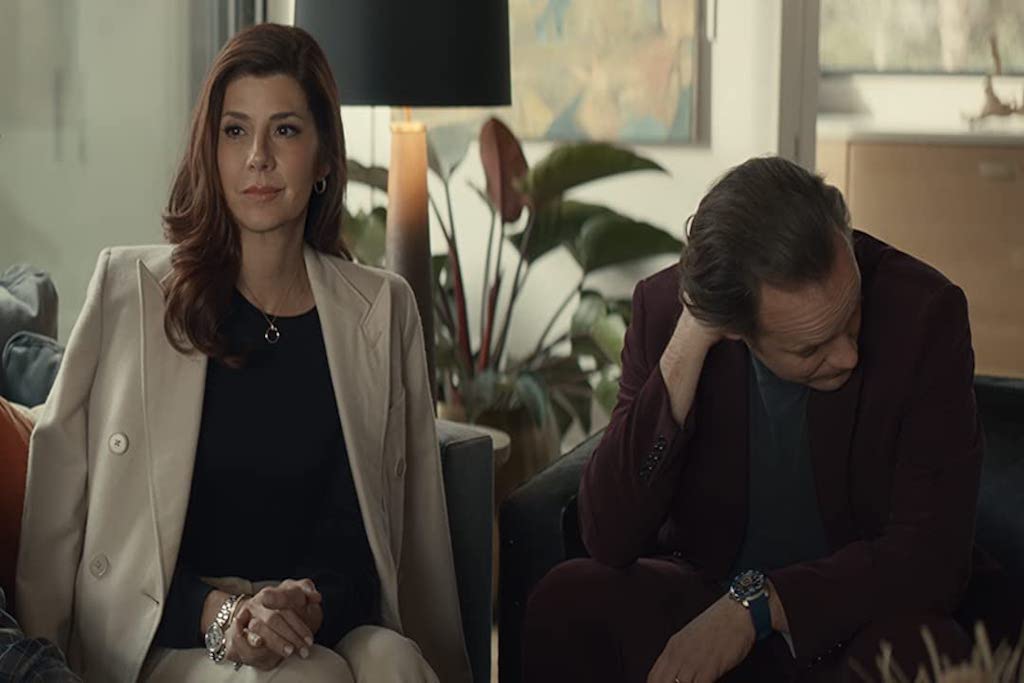 The non-linear approach to storytelling has long been one attempted throughout the annals of cinema.  Sometimes it’s executed with aplomb, others it’s incredibly disjointed.  Thankfully, Human Capital is an instance where the attempt at this story structure is mostly a successful venture, the story’s intricacies and gripping central mystery elevated by the stellar ensemble who all uniformly keep their footing.

A remake of the 2013 Italian film of the same name – itself an adaptation of Stephen Amidon’s 2004 novel – Human Capital centres around a group of individuals (some more interconnected than others) who are all brought together following a hit-and-run car accident one night; this seemingly inconsequential moment opening the film.  Initially we are unaware of just who is responsible, but as Oren Moverman’s script escalates, so too the unravelling of their respective relationships.

Broken into a series of vignettes that all end when the accident comes to light, the film’s first focused character is Drew Hagel (Liev Schreiber), a real estate agent with a history of gambling behind him who’s hoping his new wife (Get Out‘s Betty Gabriel) will keep him clear of the debt-crumbling existence that seemingly ended his first marriage.  His teenage daughter Shannon (Maya Hawke, Ethan Hawke and Uma Thurman’s screen-ready offspring) is dating (or “dating”, more correctly) the son of a wealthy businessman (Peter Sarsgaard’s smarmy Quint), which unfortunately lures Drew back into dying habits as he sees an opportunity for profitable investment and can’t help but take it, even if he’s in no financial situation to do so.

As Drew’s situation regarding his monetary woes worsen, the narrative shifts towards Quint’s wife, Carrie (Marisa Tomei, captivating as usual), a former actress now miserable trophy wife who appears as little more than just an expense within Quint’s extravagant existence.  Whilst on the page it would appear as if Carrie doesn’t read as much of a character, Tomei manages to inject her with purpose and sadness, making her character one that we manage to sympathise with in spite of her lavish lifestyle.

As Carrie hopes to make something of herself through the purchase of a dilapidated theatre, Quint’s hedge fund plummets, which effectively cancels her out, and as the tension in their relationship grows, the story shifts once again, this time towards their son (Fred Hechinger) and Shannon.  It’s here that the hit-and-run storyline will make more of an impact, though like the moments dedicated to Schreiber and Tomei, Hawke commands the instances she’s on screen.  Already having made her presence felt as a supporting player in the stories of Drew and Carrie, her turn as Shannon is at once heartfelt, tragic, and biting, transforming what could’ve been the standard sullen teenager character into something wholly dimensional.

Admittedly the ultimate reveal behind who is responsible for the accident hardly shocks, and Human Capital is one of those films where nothing necessarily definitive happens when the credits start to roll after its tight 95 minute running time, but Moverman’s script and Marc Meyers’ direction keep the narrative streamlined enough that the tension that is created boils enough for us to care.

Ultimately this film belongs to its cast, with Schreiber, Sarsgaard, and Tomei delivering stunning work as expected, with all their respective characters constantly feeling like fully-rounded individuals (likeable or not) and Hawke lending a real sense of energy and emotion to even her quieter moments, constantly boosting the film up as it goes along.  The tragic, interconnected nature of Human Capital doesn’t break genre conventions, but it still proves utterly compelling thanks to an ensemble who deeply commit to the proceedings in a manner that other films aren’t privileged enough to be afforded.

The lives of two different families collide when their children begin a relationship that leads to a tragic accident.