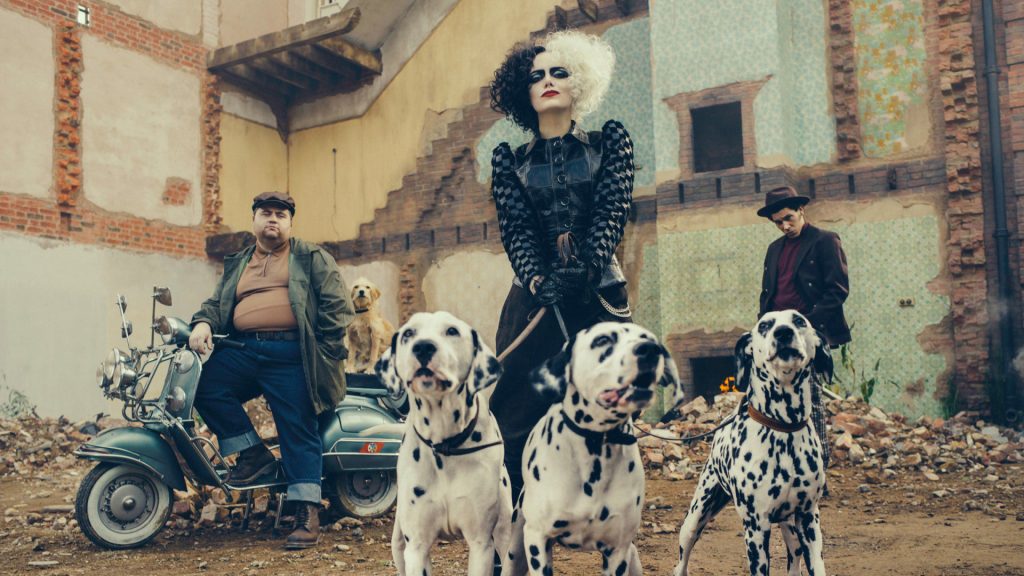 Whilst the idea of humanising a known villain with their very own origin story is one such trope that audiences are all too familiar with now, it certainly can’t be denied that it’s often a fruitful endeavour.  2014’s Maleficent turned Sleeping Beauty‘s evil queen into a more tragic figure for mass benefit; DC centred a whole film around an army of villains in Suicide Squad; and Joaquin Phoenix walked away with an Oscar for transforming a Batman adversary into a billion dollar exercise in detailing mental instability in Joker.

Less problematic than Joker, far more stable than Suicide Squad, and a little less family-friendly than Maleficent, Craig Gillespie’s Cruella nonetheless follows a similar path as these aforementioned titles by making us understand the evil that we all believe will consume its origin subject – in this case, the future animal-skinner from Disney’s otherwise accessible 101 Dalmatians, Cruella de Vil.

“Born brilliant.  Born bad.  And just a little bit mad” as she so claims in one of the film’s key turning points for our titular anti-hero, Cruella (Emma Stone, having an absolute ball) has always been something of a problematic force.  In a slightly extended prologue that details her reckless behaviour as a pre-teen in 1960’s mid-country England, a pre-Cruella was known as Estella, seemingly unable to be contained by the schooling system of a prestigious institution.  The victim of constant bullying, her take-no-prisoners response often got her in trouble and, subsequently, expelled.

Her kindly, understanding mother (Emily Beecham) doesn’t seem too phased by Estella’s vigour though and recognises that for the two of them to make anything of themselves – especially Estella, who dreams of being a fashion designer – London is their ultimate destination.  But what’s a villain’s origin story without a little tragedy? A substantial bump in their pathway leaves poor Estella an orphan, and not long after detailing her woes she’s in cahoots with a duo of similarly parentless tykes, Jasper and Horace, embracing a life of petty crime in order to make ends meet.

Fast forward a decade and the familial trio – Joel Fry and Paul Walter Hauser play the grown-up Jasper and Horace, respectively – live a comfortable-enough lifestyle that sees them far from homeless or starving as they invent different characters in order to grift the unsuspecting London townsfolk; Estella’s design skills coming in handy as she tailors each look.  It isn’t all about an angle though, and Estella eventually gets her foot in the door of a fashion establishment, one that leads her face-to-face (well, almost) with The Baroness (Emma Thompson, just stopping short of devouring the scenery entirely), this film’s actual villain.

The relationship that forms between Estella and The Baroness has a touch of the Miranda Priestly/Andie Sachs mentality that Meryl Streep and Anne Hathaway volleyed so successfully in The Devil Wears Prada, and it’s when we see that devilish glint in Estella’s eyes as she starts to uncover The Baroness’s sinister temperament that the Dana Fox/Tony McNamara-penned script sizzles with a comedic glee.

It helps Cruella as an overall product in distancing itself from its Disney constraints that someone like Gillespie is in charge of such fashionable mayhem – seriously, the costume design on display here is award-worthy – with the director injecting his signature cocksure energy into proceedings.  Similar to the somewhat nonconformist manner he helmed the Colin Farrell-led Fright Night remake in 2011 and 2017’s fiery I, Tonya, Gillespie embraces unacceptable character archetypes and laces them with a fantastical sheen whilst grounding them in a relatable setting; his penchant for gloriously on-the-nose soundtrack accompaniments is also of handsome value, with an assortment of era-appropriate rock and pop cuts livening up each sequence without serving as a distraction.

Whilst the film does toy with the notion that Cruella will truly become unhinged – after all, we know there’s an iteration of this character that murders Dalmatians for their fur – and The Baroness appears as no stranger to orchestrating exterminations, Cruella never entirely submits to being the corrupt film it could be had it been done by any other studio.  Still, for a Disney venture, this is remarkably dark, and the humour level is thankfully never cheapened by a sight gag or unwarranted sound effect, leaving the natural comediennes that are Stone and Thompson to thrive with a script that speaks to their strengths.

Owning the character in a fashion (pun intended) far removed from what Glenn Close so fabulously created in the live action 101 Dalmatians (1996), Stone’s energy is palpable throughout, strutting across (and off) the screen with a devil-may-care attitude that is equally matched by the imposing Thompson who, as conventional her villainess may be, injects enough colour into a single note to paint a canvas the big screen can barely contain.  Overlong it may be – it clocks in at 134 minutes – Cruella is a wicked, camp surprise that has no right to be as delicious as it is.

Set in the 1970s in London during the punk rock movement, the film follows Estella de Vil, an aspiring fashion designer, and explores the path that will lead her to become a notorious criminal known as Cruella de Vil.

Cruella (PG) is screening in Australian theatres from May 27th, 2021.  It will be available on Disney+ as part of their Premiere Access* range from May 28th.  *Additional fees and conditions apply.