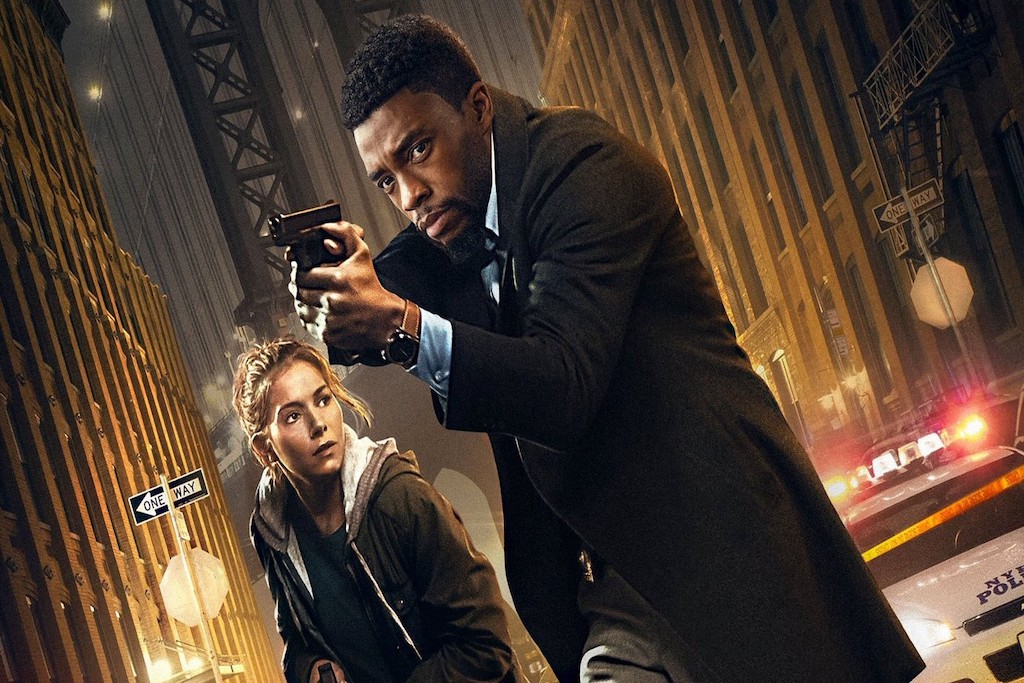 Everything presented in 21 Bridges is suitably fine for the undemanding audience that will likely lap this up (before forgetting about it entirely) but as passable as the ingredients are, there’s never enough of them to deem Brian Kirk’s cop thriller as a fully rounded product.

The plot? Well, it’s got some holes to fill.  The staple car chases? They’re here, just not that exciting.  The performances? Acceptable enough.  It’s the type of man-hunt actioner we’ve seen countless times before, and usually done much better.

Hoping to prove his worth outside the MCU, Chadwick Boseman slips out of his Black Panther attire to don a not-so-form-fitting New York City detective uniform, starring as Andre Davis, a second generation officer who has a reputation for hunting down those that dispose of cops.

As it passes 1am in the city that doesn’t sleep, or more specifically its misbehaving little sister Brooklyn, a duo of criminals (Taylor Kitsch’s unhinged Ray and Stephan James’ more centred Michael) arrive at a high-end wine merchant where they have been tipped off about 30kgs of untapped cocaine.  When cops pay an unexpected (i.e. highly suspicious) visit, Ray and Michael leave a trail of eight dead policeman following a shoot-out born from their hot-headed frustration that their tip failed to mention the white powder on hand is 10 times the amount they were informed.

With police officers dead it makes perfect sense for Davis to be called in, and given that he knows the ins-and-outs of the criminal mind (or at least that’s what the Adam Mervis/Matthew Michael Carnahan script alludes to) he devises a plan to shut down the city’s transport system which, wouldn’t you know it, includes the 21 bridges that lead out of Manhattan.

It’s a neat hook, and there’s some great late 1990’s/early 2000’s type music cues that go with Boseman’s delivery, but there’s really not a whole lot to grasp onto when everything starts to unspool.  The additives of J.K. Simmons, as an NYPD Captain, and Sienna Miller, as a Detective (and let’s not forget, a single mother too) look good from a suitable casting point of view, but a lazy subplot involving corruption within the force essentially leaves us as audience members waiting to see which of our predictions for “which side player is actually a villain” comes to life first.

And as much as 21 Bridges seems to be banking on Boseman (as well as hyping up the producing credit from Joe and Anthony Russo, the brotherly duo who directed both the latter Avengers sequels, Infinity War and Endgame), it’s rather surprising that there’s a distinct lack of charisma on his end, quite often appearing as if he’s half-asleep and wanting to be anywhere else.  If anyone injects this run-of-the-mill action flick with a sense of personality it’s James as the misunderstood Michael, his reluctant criminal bringing a sense of pathos to the otherwise mediocre material.

An actioner that feels more suited to a streaming lifespan as opposed to earning cinematic necessity status, 21 Bridges is generic, safe storytelling that proves a fine listen for audiences who are satisfied with hearing chapters that touch on already-familiar ground.  For everyone else, best wait for the next edition.

21 BRIDGES follows an embattled NYPD detective (Chadwick Boseman), who is thrust into a citywide manhunt for a pair of cop killers after uncovering a massive and unexpected conspiracy. As the night unfolds, lines become blurred on who he is pursuing, and who is in pursuit of him.