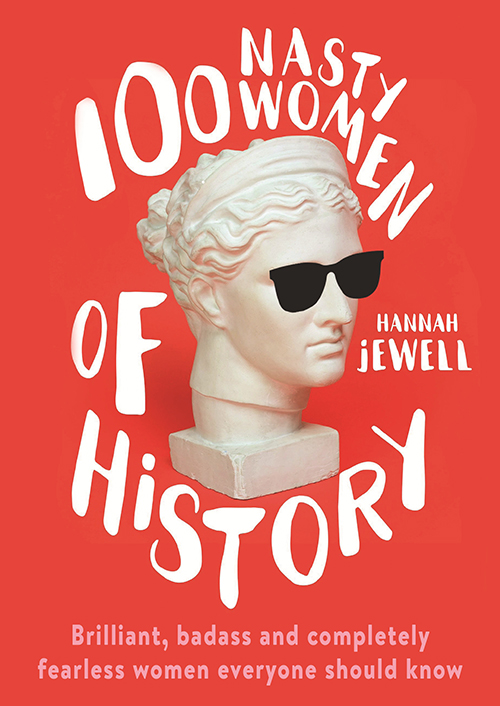 100 Nasty Women of History by Hannah Jewell is packed with incredible stories of women you might never have heard of and many you’ll already know.

Fun fact: Donald Trump leaned into the microphone as Hillary Clinton spoke during the US presidential election and called her ‘such as nasty woman’. The phrase went viral and has been turned into a badge of honour for women all around the world.

The introduction is short but it’ll give you an idea of Hannah’s tongue-in-cheek humour. Each nasty women have a couple of pages devoted to their life story and achievements.

The book is divided into sections:

Australian Nancy Wake features as the most decorated women war hero of World War II, and she once successfully killed a man with a single judo chop. (Admittedly New Zealand born).

There is a short conclusion and an ‘old people glossary’ – which let’s face it some young people will also need to read.

100 Nasty Women of History is a great entertaining read and a must-have for all modern feminist’s bookshelves. #girlpower

Available from your favourite bookstore as a paperback, hardback and ebook.

Hannah Jewell is a pop culture host and editor at The Washington Post, and a former senior writer at BuzzFeed UK, where she became known for her humour writing about gender, her satire of British and American politics. She presented BuzzFeed‘s live 2016 election night show, which was watched by nearly 7 million people.

Born in the UK, she grew up in California and did her undergraduate study at UC Berkeley in Middle East Studies, then moved to the UK for an MPhil in International Relations and Politics at Cambridge. Now, she combines her background in history and politics with her love of the internet to write about remarkable women of the past with an accessible, hilarious, and sometimes sweary style.