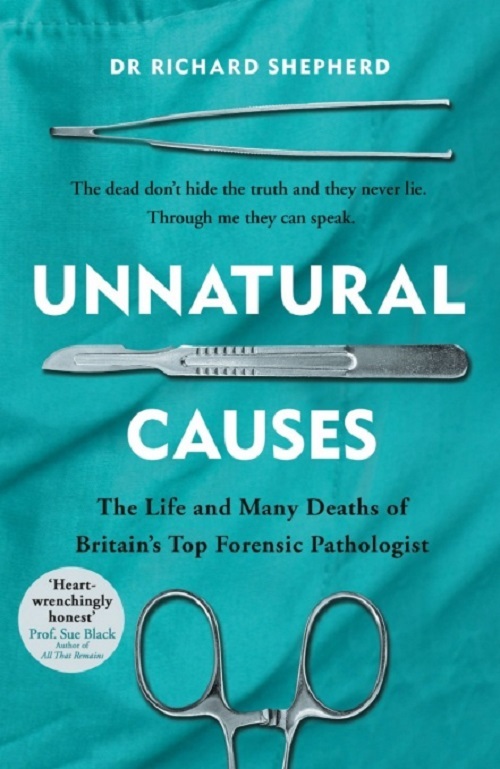 Unnatural Causes by Dr Richard Shepherd, the UK’s top forensic pathologist, tells of his remarkable life and gives a rare insight into solving the mysteries of unexplained or unexpected death.

Each post-mortem tells a story and Dr Shepherd has performed over 23,000 of them. He is dedicated to solving the problem of why that particular person died, not only to bring about justice for the deceased but also closure for their family and friends. His humanity knows no bounds in the lengths he will go to, often to the detriment of his personal life.

Dr Shepherd works closely with the police seeking the truth from suspected murders, mass killings, natural disasters, and unusual accidents. His findings are presented to coroners and courts and he is frequently called to give evidence for the defense or the prosecution. This evidence has imprisoned those guilty, freed the innocent and turned around so-called ‘open and shut’ cases. He has been involved in several high-profile cases, including the re-opening of the case concerning the death of Princess Diana.

A humane and compassionate man, he works unremittingly for the dead and their families. The trauma experienced in his work over the years eventually affects both his mental health and his family life.

Dr Shepherd writes in clear and understandable narrative for the layperson. The anecdotes he tells of various cases are written with care and consideration for both the dead and their families, and the sensibilities of the reader. It is a truly remarkable read and brings a sense of reassurance regarding the consideration given to the dead and the tremendous effort given to each case. It is an enthralling read and a genuine page-turner.

Dr Richard Shepherd was born in West London but grew up in Watford. At the local grammar school, he was introduced to a medical textbook smuggled into the classroom by a friend, which opened his eyes to the world of crime and murder, setting him on a lifelong quest to understand death in its many forms. He trained as a doctor at St George’s Hospital medical school at Hyde Park Corner, qualifying in 1977 and then completed his postgraduate training as a forensic pathologist in 1987. He immediately joined what was then the elite forensic department at Guy’s Hospital. He has been involved nationally and internationally in the forensic investigation of thousands of deaths from unnatural causes, from headline-making murders to mass natural disasters, and many sudden and unexplained deaths that his investigations showed were from natural causes or due to accidents. His skills and expertise still remain in demand around the world.