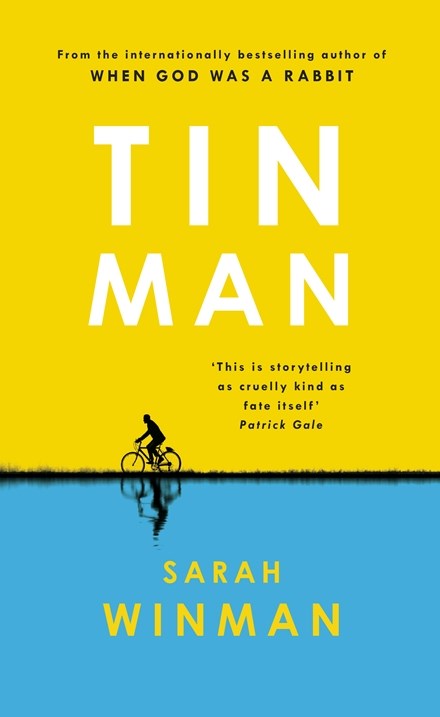 Tin Man by Sarah Winman is her third novel, following her previous bestselling novels When God Was a Rabbit, and A Year of Marvellous Ways.

The novel begins in 1950, when Dora Judd wins a raffle prize at the local Community Centre. When asked to choose her prize, she defies her husband and takes a painting, a reproduction of Van Gogh’s Sunflowers. When she and her husband return home he tries to remove the painting from the wall where she has hung it, but she stands up to him for the first time in her life. The painting stays and remains a symbol of her belief that men and boys are capable of beautiful things.

The year changes to 1996 when we meet 46-year-old Ellis, Dora’s son, who works the night shift in an Oxford car factory, as a ‘Tin Man’, smoothing any dents in the panels of cars before they’re sent out to dealers. His Mother had encouraged him to become an artist, but, after her death, his Father had him apprenticed to the car plant as soon as he could leave school. Now a widower, his loneliness is destroying him and the perceived presence of his dead wife constantly haunts him.

Ellis turns to memories of Michael, his best friend during their teenage years, and the love that bloomed between them. Then to meeting Annie, who became his wife, and how the three of them formed tight bonds of love and friendship, which were broken after Michael’s Grandmother died, and he left Oxford for London.

The novel switches to 1989 and Michael’s perspective of his friendship with Ellis and the nine days that they spent in the South of France. They became lovers and how the future could have been so very different for them both.

Then Michael turns to the present as he cares for his lover, only known as G, as he battles Aids.

This is a book of memories, of love and laughter, compassion, loss, pain and regret. It is beautifully written from the first page to the last. Winman has created a powerful novel of unforgettable characters, revealing her great empathy and sensitivity towards sexual identity. She deals with situations regarding the Aids epidemic of the 1980’s in a knowledgeable and skillful manner.

Tin Man is a wonderful novel that is a must read this year.

Available in paperback, hardback, and ebook.

Sarah Winman grew up in Essex and now lives in London. She attended the Webber Douglas Academy of Dramatic Art and went on to act in theatre, film and television. In 2011 her debut novel When God was a Rabbit became an international bestseller and won Winman several awards, including New Writer of the year in the Galaxy National Book Awards. Her second novel A Year of Marvellous Ways was published in 2015, and her third, Tin Man, was published this year and shortlisted for the 2017 Costa Book Awards.