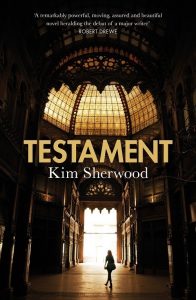 Testament by Kim Sherwood is her debut award winning novel.

When Joseph Silk dies, his Granddaughter, Eva, is by his side. She has been living in Silk’s house in Fitzroy Park, London, caring for him as his health deteriorated. Silk is an artist of note, described as ‘one of Britain’s last 20th Century art giants’ and an ‘Abstract Expressionist’.  Despite ill health, he has continued to paint in the ‘Blue Room’ of his house. His wife, Rosemary is deceased and his only child, John, Eva’s father, has left his family to live in Provence. Eva’s mother has moved to Melbourne.

When Eva discovers that Silk has left her his entire estate, which includes his art works, she also learns that his name was formerly Jozsef Zyyad and he arrived in Britain in 1945 as a Hungarian deportee.

Months before Silk had received a letter from Felix Gerschel, a researcher at the Jewish Museum in Berlin. Gerschel wants to interview Silk about a testament found in their collection. In 1945 the National Relief Committee for deportees had asked him a selection of 300 questions about his experiences during the Nazi occupation of Hungary.

After initially refusing, Silk later asks Gerschel if he will bring the testament to London. Unfortunately, he becomes ill before Gerschel can do so.

When Gerschel contacts Eva after Silk’s death, she asks if she will be allowed to see the testament if she flies to Berlin. He agrees to this and, consequently, her search for the truth of Silk’s past begins.

As Jozsef’s story unfolds, it takes the reader to Budapest as WW2 begins. There follows his horrific experiences, as he is taken from his family, forced to labour in Hungary and interned in the camps. Gaining refugee status, he is sent to the Lake District in England and eventually settles in London, and so begins his reinvention as Joseph Silk.

This is a well-researched and powerfully written first novel. Hopeful and inspiring, the narrative tells of love, friendship and survival against the odds. It is a reminder never to take our liberty for granted.

Testament is available in paperback, hardback and eBook.

Kim Sherwood was born in Camden in 1989 and lives in Bath. She studied Creative Writing at UEA, is now Senior Lecturer at the University of the West of England, and teaches prisoners. Her pieces have appeared in Mslexia, Lighthouse, and Going Down Swinging. Kim began researching and writing Testament, her first novel, after her grandfather, the actor George Baker, passed away and her grandmother began to talk about her experiences as a Holocaust Survivor for the first time. It won the 2016 Bath Novel Award.