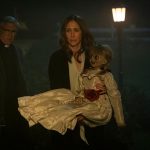 Though they've earned their share of sizeable box office figures, critically the films encompassing the Conjuring universe - save for the original and its sequel - haven't exactly justified their success.  Annabelle, it's sequel Creation, The Nun, and The Curse of the Weeping Woman all project an air of creepiness thanks to their titular characters but fail to summon much … END_OF_DOCUMENT_TOKEN_TO_BE_REPLACED

https://www.youtube.com/watch?v=UW3xYYJ6NoE As someone who was a fan of Gareth Edwards' 2014 Godzilla reboot, with its gradual build-up approach something of a fresh take on the usual big budget action tentpole standard, it's a real shame that he wasn't on board this epic-in-scale-but-limp-in-execution sequel that ignores all traces of subtlety and banks on overt simplicity … END_OF_DOCUMENT_TOKEN_TO_BE_REPLACED