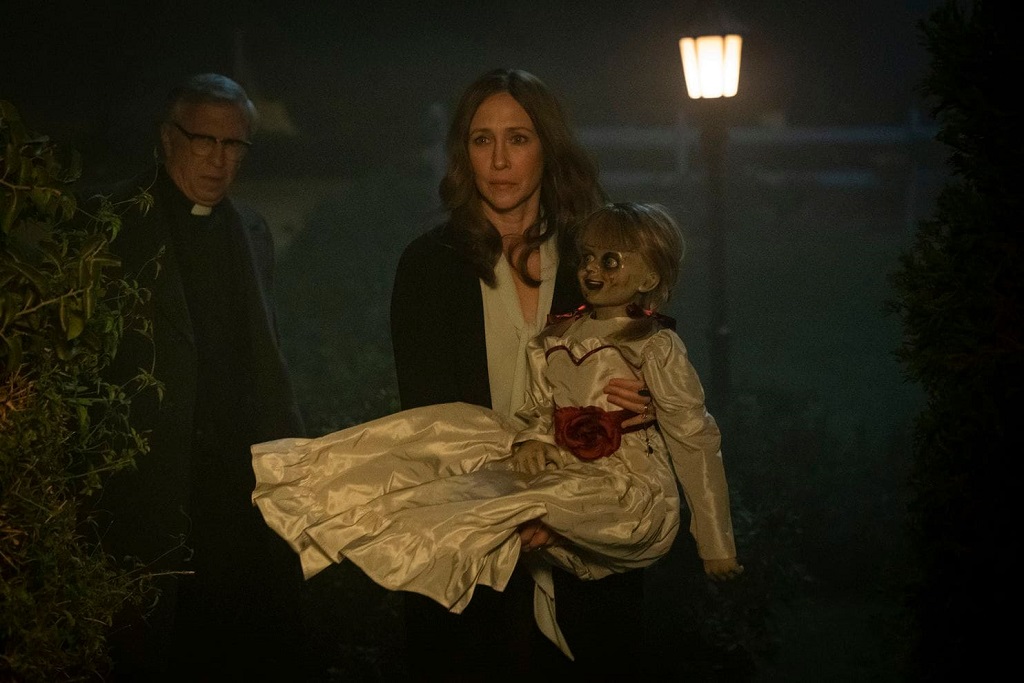 Though they’ve earned their share of sizeable box office figures, critically the films encompassing the Conjuring universe – save for the original and its sequel – haven’t exactly justified their success.  Annabelle, it’s sequel Creation, The Nun, and The Curse of the Weeping Woman all project an air of creepiness thanks to their titular characters but fail to summon much genuine terror, instead relying on stale genre tropes that only the most inexperienced horror viewer would deem “scary”.

Given the uninspired road currently travelled with these films then, my enthusiasm for Annabelle Comes Home was considerably dim, so you can imagine my surprise when I found myself enjoying the latest scare tactics from the undeniably unnerving porcelain doll.  To say Annabelle Comes Home is the best of both the Annabelle series and the spin-off films from The Conjuring isn’t exactly high praise, nor a hard task to achieve, but writer/director Gary Dauberman (who penned both previous Annabelle films, as well as The Nun and the It remake) injects an enthusiasm into proceedings here that has been noticeably absent from previous offerings.

The titular doll is still very much Annabelle Comes Home‘s focal point, but Dauberman delights in exploring the treasure trove of possessed goodies that fill the artifacts room that Ed and Lorraine Warren (Patrick Wilson and Vera Farmiga, briefly reprising their lead roles from The Conjuring) have specifically locked up so that nosy teenagers, specifically a grieving young girl who blames herself for the death of her father the year prior, won’t be tempted to perform their own ritual of sorts in a bid to connect with the deceased.  One guess as to which character archetype snoops around said room and unleashes a slew of evil on the Warren household?

The doll itself isn’t specifically evil as we learn, more that she acts as a beacon to call out to other evil spirits to wreak havoc on us unsuspecting humans, so as much as Annabelle Comes Home has fun playing with the doll and what it’s capable of, it’s the array of other entities lurking within the Warren household that the film truly embraces.  The film’s finale unspools with almost too many figures wreaking havoc – don’t be surprised if further spin-offs are announced centering around some of this film’s extra players – but it’s enjoyably gonzo nonetheless, it just takes its sweet time getting there.

I’m all for character development in horror, even in throwaway, haunted house pics like this, and Dauberman has indeed taken the care to flesh out his lead trio of young female leads (McKenna Grace as the Warren’s quiet daughter Judy, Madison Iseman as her bubbly babysitter Mary Ellen, and Katie Sarife as Mary Ellen’s inquisitive bestie, and aforementioned nosy teen, Daniela), but in doing so he’s also done the film a slight disservice by giving the girls a little too much airtime, resulting in a feature that can’t quite balance its scares with its schmaltz; a subplot involving the lovelorn Bob (Michael Cimino) and his affection for Mary Ellen adds a few moments of levity and intentional humour but ultimately results in story padding that could be easily exorcised.

As the film hovers between its multiple personalities of being a family drama, a lighthearted romance, a haunted house feature, and a possessed horror movie, somehow it manages to maintain just enough interest to keep its audience invested.  The previous Annabelle films unfortunately amplified that perhaps there isn’t as much life in this series as thought, but if this homecoming is indicative of where the franchise could lead, perhaps this doll isn’t as dead on arrival as expected.

Determined to keep Annabelle from wreaking more havoc, demonologists  Ed and Lorraine Warren bring the possessed doll to the locked artifacts room in their home, placing her ‘safely’ behind sacred glass and enlisting a priest’s holy blessing. But an unholy night of horror awaits as Annabelle awakens the evil spirits in the room, who all set their sights on a new target—the Warrens’ ten-year-old daughter Judy, and her friends.