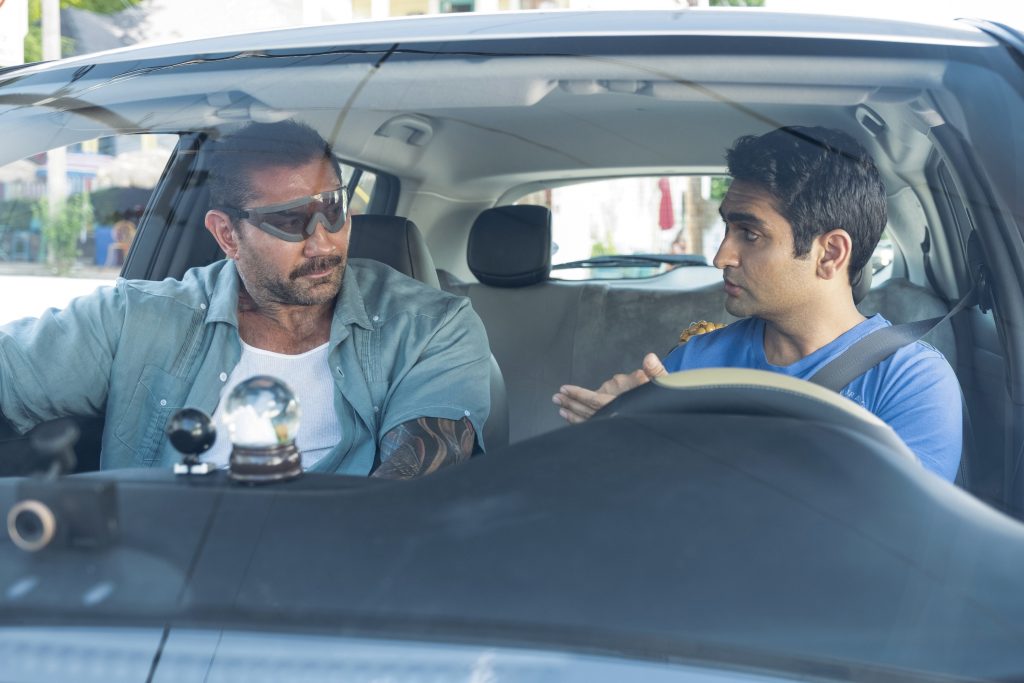 Much like the statistic for most comedies wherein not every joke entirely lands, Stuber, as a whole, is a buddy comedy actioner that doesn’t work, but it’s certainly not for a lack of trying.  Hoping to utilise the chemistry of unlikely co-players Kumail Nanjiani and Dave Bautista, Stuber seems to place itself on auto-pilot with the intention that the proven comedic talents will pick up the slack for its underwhelming script.

Before the mismatched duo are thrown together, Tripper Clancy’s screenplay sets up their differing personalities by showcasing them at their respective day jobs; Stu (Nanjiani) is slacking it at a sports goods store, using his side hustle as an Uber driver (do you understand the ever so clever title now?) in a bid to fund a women’s only gym, which in itself is a cover for the fact that his business partner (Betty Gilpin) is the woman he pines for; Vic (Bautista) is a volatile policeman on the hunt for a ruthless trafficker (Iko Uwais) who killed his partner (Karen Gillan in a bizarre, barely registering role the equates to little more than a glorified cameo) following a public shoot-out. 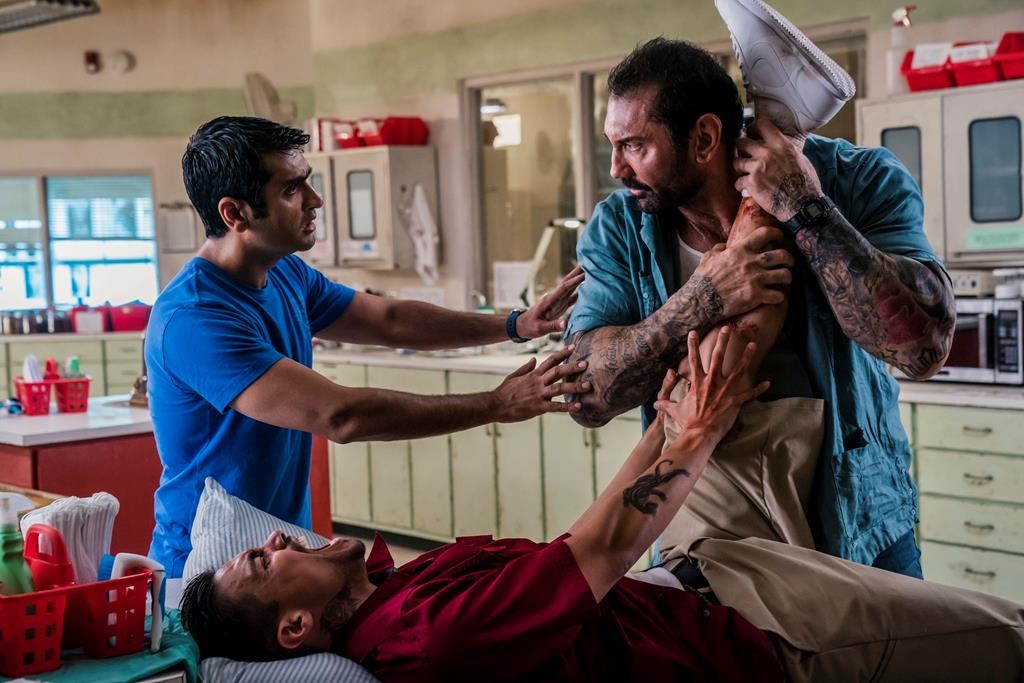 Vic’s been told to take a breather by his concerned boss (Mira Sorvino), sentiments shared by his adult daughter (Natalie Morales), and given that he’s also scheduled himself some much needed Lasik eye surgery, one would assume he’s taken note.  But where’s the fun in that? No, we want Bautista’s oversized frame constantly running into objects he can’t see, and a bumbling Nanjiani to take him wherever he needs to go, and that’s exactly what Stuber delivers in its initial stages as the constantly squinting Vic essentially holds Stu hostage as he orders him to Uber around Los Angeles, closing in on a case he’s been specifically told to stand down from.

To be fair, buddy comedies have worked with a lesser premise than what Michael Dowse (Goon) has on offer, and as long as they deliver on their comedy and action quota, most can be considered something of a mild success.  Stuber occasionally reveals itself as a contender for middle ground entertainment as it’s difficult to not enjoy the back-and-forth between Nanjiani and Bautista.  They’re not firing on all cylinders in any manner, but it seems when the script loosens and allows the two to pot audible shots at one another, moments of worth shine through.  It’s all too few and far between though as the script constantly delays any momentum by insisting on focusing on Stu’s non-existent love life, a plot trope that literally adds zero value to the proceedings. 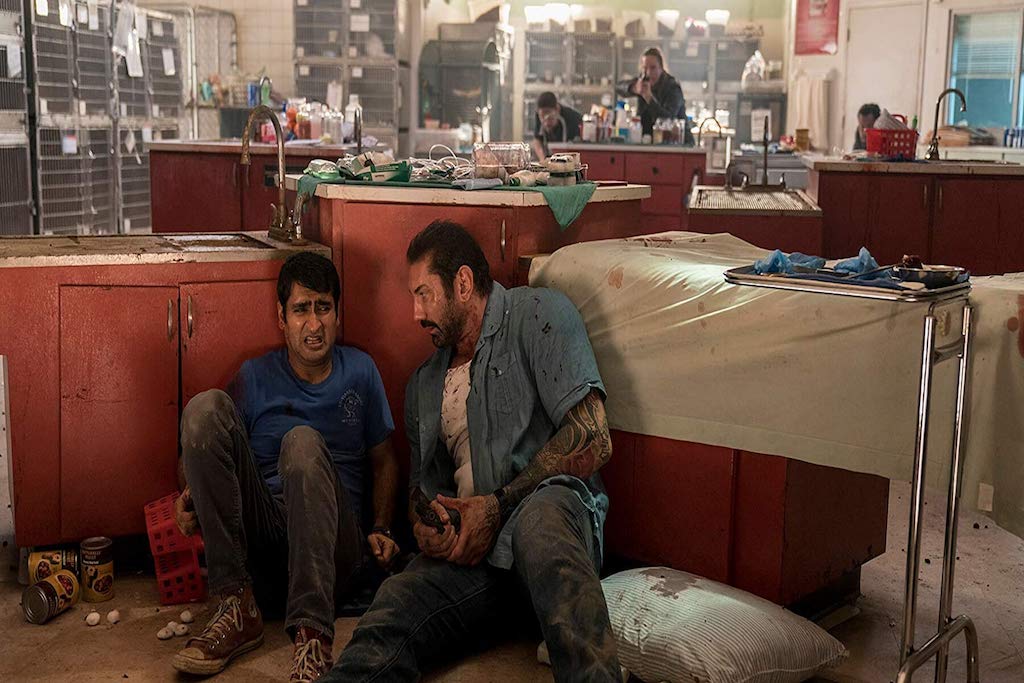 From an action standpoint, Stuber rarely offers a moment of choreographed exertion we haven’t seen before either, although a car chase sequence involving a rogue propane tank results in a truly wince-inducing gag which would be considered the film’s boldest moment, and had the production overall embraced this dial-it-up-to-11 mentality, it very well could’ve been something far more enjoyable.

Squandering its potential with lazy, derivative framing, Stuber is an awkward journey that reaches its destination, but nowhere near as smoothly as you would like.  Nanjiani is a perfectly serviceable operator, and Bautista is amusing fodder as a backseat driver, but that all encompassing perfect score it’s seeking is well out of its reach.

When a mild-mannered Uber driver named Stu (Kumail Nanjiani) picks up a passenger (Dave Bautista) who turns out to be a cop hot on the trail of a brutal killer, he’s thrust into a harrowing ordeal where he desperately tries to hold onto his wits, his life and his five-star rating. Directed by Michael Dowse, this action-comedy from 20th Century Fox also stars Iko Uwais, Natalie Morales, Betty Gilpin, Jimmy Tatro, Mira Sorvino and Karen Gillan.