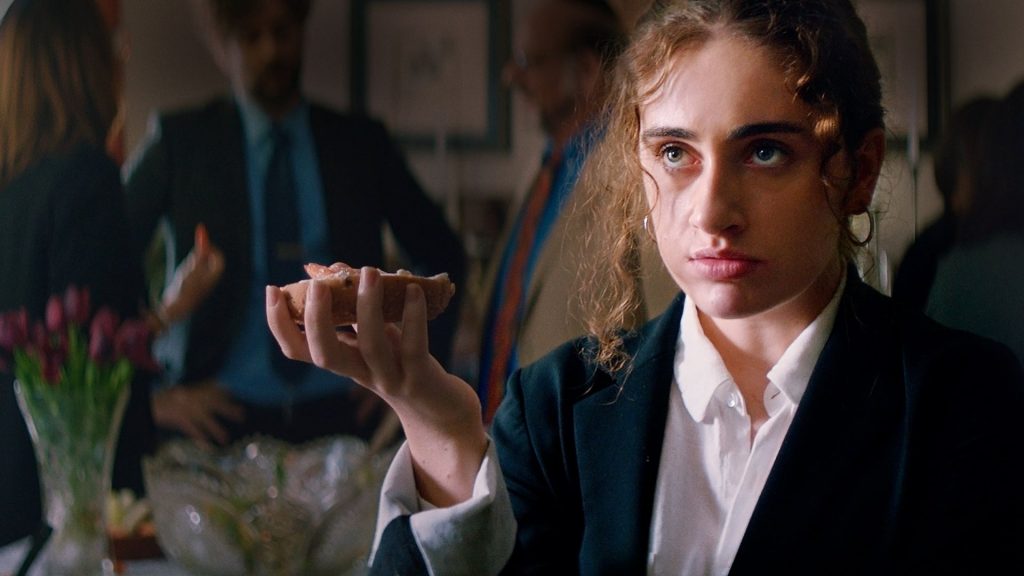 Though its title suggests humorous inclinations, and indeed Emma Saligman’s Shiva Baby is technically a comedy, the material and subsequent approach within is anything but playful.  The film’s near-singular setting makes way for plenty of hilarity to ensue, but there’s also a toe-curling layer of tension that likens the film more to something born from horror than humour.

The “shiva baby” at the centre of Saligman’s taut comedy is Danielle (Rachel Sennott, a star-in-the-making performance if ever there was one), a directionless, bisexual college senior whose surface-level snarl masks the depths of her insecurities.  When the film begins we’re privy to Danielle and Max (Danny Deferrari), her sugar daddy of sorts, in the throws of coitus.  This choice of financial gain is one she has no intention of sharing with her more traditional parents, Joel (Fred Melamed) and Debbie (Polly Draper), least of all during a shiva – a week-long mourning tradition for the Jewish community – they are all attending.

Danielle’s secretive lifestyle is enough of a burden to keep to herself as is, but when her ex-girlfriend, Maya (Molly Gordon), and Max himself arrive, not to mention him being in tow with this sleek, power-woman of a wife (Dianna Agron), metaphorical excrement hits the fan in the most colossal of fashions.

Evidently aware of how awkward family gatherings can be under normal circumstances, Seligman both scores and frames the film with a horrific mentality, escalating the intensity to a level most would never associate with a situational comedy such as this.  Tight angles on character’s faces lend a claustrophobic feel to Shiva Baby, with Seligman managing to extract fear out of the most mundane of conditions, further bolstered by Ariel Max’s haunting score and Sennott’s committed performance; she’s a deadpan delight.

Somehow managing to find the perfect balance between the ferocity and the jocularity of its material, Shiva Baby is a jet-black comedy that’ll make you snicker as much as it will induce stress.  This is not the standard genre mash-up perhaps audiences will be expecting, but, now more than ever, the boldness of originality in cinema during a time saturated with studio tentpoles needs to be celebrated.

A bisexual college student runs into her sugar daddy and her ex-girlfriend at a Jewish funeral service with her parents.