You are here: Home / Entertainment / Ready or Not – Film Review 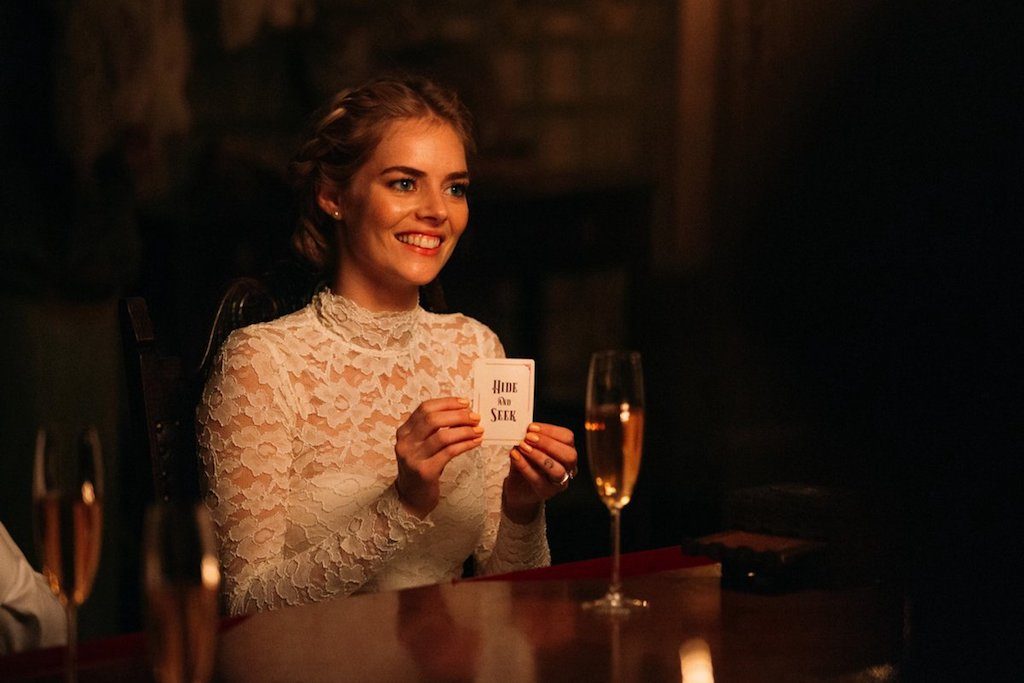 And with that sound statement, one screamed in anger and disbelief by Ready or Not‘s resilient heroine Grace (a star-making turn from Australia’s own Samara Weaving), filmmaking collective Radio Silence’s darkly funny horror ride proudly gives the obscenely wealthy one percent the middle finger they deserve.

Whilst the Guy Busick/R. Christopher Murphy-penned script certainly delights in the social commentary aspect of the lengths rich people will go to to maintain their accustomed lifestyle – and this film picks one hell of an option in doing so – Ready or Not is also masterfully funny and presents a neat hook to rope its audience in.

At the start of the film’s slick 95 minute running time, the aforementioned Grace says “I do” to her beloved Alex (Mark O’Brien), a member of the stupefyingly wealthy Le Domas family, a “dominion” who have made their fortune from the boardgame industry.  Neither is particularly thrilled to be exchanging nuptials on the family ground, but Grace is determined to play the suitable part to be welcomed into the family.

Despite hostility from Alex’s seething, almost devil-like aunt (Nicky Guadagni), Grace feels as if she’s walked the right steps towards the family’s acceptance of her, especially following an encouraging exchange with Alex’s mother (Andie MacDowell, sublime).  The final step for Grace arrives at the stroke of midnight on her wedding night as she is advised to partake in a long-running Le Domas family tradition of playing a game.  She is presented with an heirloom box and advised to retrieve a card from it,  and whichever game is instructed to play, she must do so.  Seems strange but admittedly harmless, right?

Once she announces that Hide and Seek is the game she was given, there’s an immediate air of dread and regret that lingers over the Le Domas family.  Grace is none the wiser, simply believing she’s to try and outlast their clutches for as long as she can.  It isn’t too long before the truth comes to the surface though and she understands that her role as the target is far more brutal and terrifying than anticipated.

Ready or Not clues us in on its twisted premise right from the get-go thanks to a prologue that addresses just enough of the mythology behind their madness without overstuffing us with information: basically, the Le Domas crew believe they owe their fortune to Satan and should they not sacrifice young Grace then they will all perish instead.  It’s absolutely ridiculous, but the film has its tongue so firmly planted in its cheek (in fact it’s almost bursting right through the skin) that it only adds to the devilish fun of it all, and watching each family member – which includes an excellent Adam Brody as Alex’s alcoholic brother, a wired Melanie Scrofano as their coked-up sister, and a stern Henry Czerny as the family patriarch – respond to he prospect of killing their new in-law in their own individual manner is a real nasty treat.

As horrible as the family are, it’s a testament to the writers that we never tire of them.  Sure, we can’t wait for them to all meet their gruesome end (and the film does indeed have some fun with how macabre comedy can be) but there’s still something inherently interesting about them, especially given the notion of how much they believe that their livelihood depends on sacrificing Grace.  And as for Grace, well Weaving is a damn star is ever there was one.  Consistently delivering throughout the last couple of years as she’s broken away from her humble Home & Away soap beginnings, her role plays to her strengths as both a comedic and dramatic performer.  There’s an elegant vulnerability to the character as she describes her yearning to be a part of a true family, but once her wedding dress starts to lose its delicate trimmings and it becomes more and more blood splattered as the night wears on, her natural aura as a capable, weapon-wielding heroine shines through.

Whilst comparisons to Adam Wingard’s under appreciated horror gem You’re Next are inevitable, Ready or Not ultimately punctures similarities by posing the question of what to believe when it comes to the supposed curse the family believe they are under.  If it’s real or imaginary, they have devoted themselves to it in a manner that’s disturbing all the same, and the film’s payoff when answering is sure to remain a favourite for the genre hounds who will lap this gory mess up with glee.

Bloody, twisted, and hilarious, Ready or Not is an absolute treat as both a fresh offering for horror fans and cinema in general for 2019.  Matt Bettinelli-Olpin and Tyler Gillett (collectively known as Radio Silence) have delivered in spades when it comes to concept comedy and blood-soaked set-pieces, furthering the genre’s penchant for taking risks and executing with sharp precision.

About Ready or Not

READY OR NOT follows a young bride (Samara Weaving) as she joins her new husband’s (Mark O’Brien) rich, eccentric family (Adam Brody, Henry Czerny, Andie MacDowell) in a time-honored tradition that turns into a lethal game with everyone fighting for their survival.

Ready or Not (MA15+) is screening in Australian theatres from October 24th 2019.