You are here: Home / Entertainment / Pieces of a Woman – Film Review 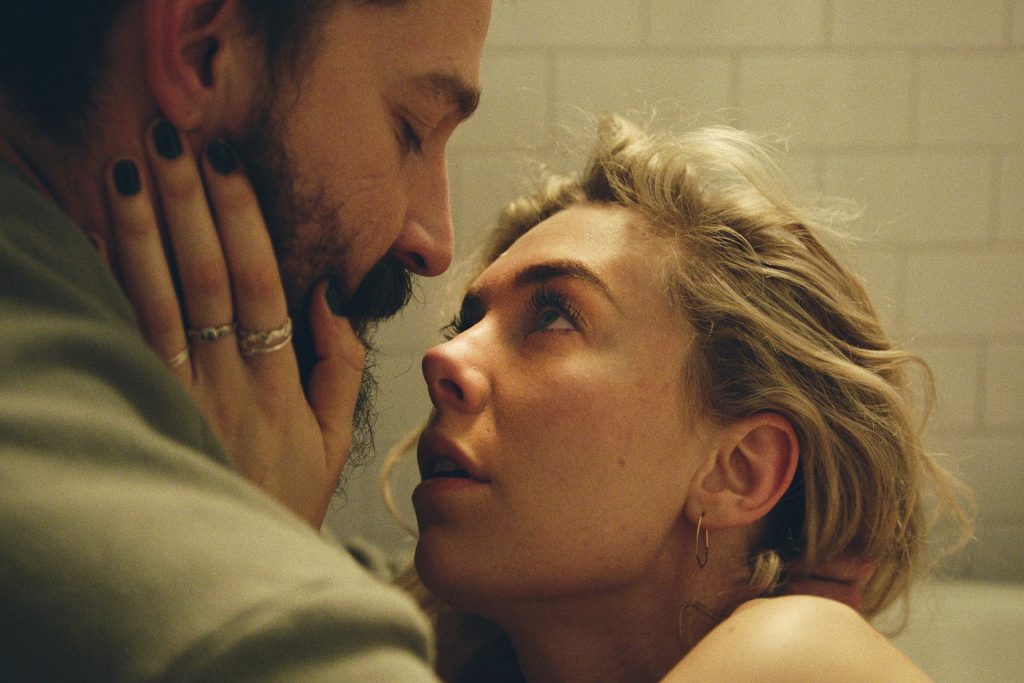 It’s been said that even the strongest marriages may not survive the death of a child, and Kornel Mundruczo’s devastating drama Pieces of a Woman explores such a notion in the most visceral of manners.

Following the briefest of introductions that easily explains the dynamic between Martha (Vanessa Kirby) and her partner (Shia LaBeouf’s Sean) – as well as how her mother, Elizabeth (Ellen Burstyn), views him – the film segues into a single-take, near-30 minute account of a complicated childbirth.

Seemingly determined to follow through with her desire for a home birth, despite reservations from Sean, Martha appears ready for the process, arranging a midwife to be on-hand for assistance.  When their planned midwife can’t attend – we learn she’s in the middle of another birth – Eva (Molly Parker) is sent as her replacement, a quiet, calming, if unsure woman who consistently assures Martha and Sean that she can be trusted during this process.

When the baby’s heartbeat is weaker than expected during the birth, Eva accelerates the procedure, signalling Sean to call 911.  Tragically it’s all for nought when the newborn dies only seconds after being delivered, with both the film’s characters and temperament dramatically altered moving forward; though, ultimately, nothing hits quite as hard as the emotional pain explored during the film’s opening sequence.

Unlike the camera trickery Sam Mendes implemented throughout 1917 to give the illusion of an unbroken take, Pieces of a Woman is a true exercise in camera fluidity. Parker, LaBeouf and Kirby are intimately, almost uncomfortably filmed, and not one ounce of vanity is evident throughout the scene that I can only imagine could be incredibly triggering for anyone who has suffered such a loss; I would absolutely recommend proceeding with caution if the subject is one you have a personal tie to.

After such a strong opening the film almost puts itself at a disadvantage in that it never matches such intensity for the remainder of its 2-hour running time.  It’s not to imply that the film doesn’t remain investing, there’s just a lack of intricate urgency that was so evident during such a crucial sequence.  Martha and Sean’s relationship earns most of the film’s remaining focus, with it understandably crumbling and seemingly irreparable.

The emotional disconnect between the two plays into the detachment Sean feels from Martha’s mother – she makes it evident throughout how little she cares for him – which ultimately drives him to start drinking again, a trait the film broaches throughout he’s been doing his best to avoid.  On the mention of Sean, it’s difficult to separate the character’s unlikeable tendencies with that of the personal turmoil of LaBeouf.  Currently embattled in controversy due to the abusive distress he reputedly inflicted on former girlfriend FKA Twigs, the at-times domineering temperament he displays as Sean feels all the more unnerving due to the actor’s reputation; one incredibly intolerable moment frames his frustration at being at a distance from his wife and initiating sexual contact, despite her obvious disinterest.  Though she never outwardly says no – at least initially – her body language suggests otherwise, and when she does stop the situation he angrily storms off in a manner that suggests she’s at fault.  Whilst it’s a character mindset you understand, it’s not one we agree with, nor tolerate, even more so now with LaBeouf in a far more disdainful light.

Whilst LaBeouf’s presence is difficult to ignore, thankfully the film never relies solely on him to propel forward.  Though Kata Weber’s script falls into something of hopeful melodrama in the film’s backend – the court case over whether or not Eva is responsible for the baby’s death becomes the eventual focus – threatening to undercut the realism that most of the narrative has adhered to in the process, Kirby maintains a rawness to her performance that simply can’t be ignored.

Whilst Pieces of a Woman should absolutely be seen, this is yet another example of an effective film not providing escapism in any manner.  This is organic, emotionally wounding work that could prove incredibly upsetting to audiences.  If you feel its subject matter is something you can face though, then Mundruczo’s reactive film is worth the endurance.

About Pieces of a Woman

Pieces of a Woman (M) is screening exclusively through Dendy Cinemas for a limited season from December 31st 2020.  It will be available to stream on Netflix from January 7th 2021.