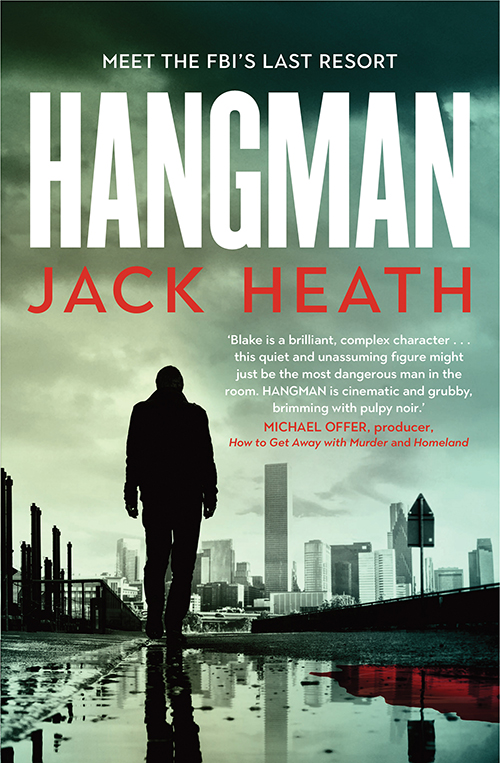 Hangman by Jack Heath is the first adult novel by the bestselling Young Adult writer. It is set in Houston, Texas, where a young boy is missing, and his mother has received a call demanding a ransom for his return. As the deadline approaches and the police have no leads, the Director of Houston Field Office FBI calls in Hangman. It’s the codename for Timothy Blake, a psychopath known to Director Luzhin, and the only person deemed capable of solving the crime.

Special Agent, Reese Thistle, is assigned to Blake as his partner, neither knowing at the time that they knew each other in a past best forgotten.

The kidnapper proves to be more difficult to track down than Blake had first thought. The trail leads him on a bloody chase through the dark and deadly world of drug barons and their minders, dealers and users.  His body may be bruised and broken, but Blake is determined to find the kidnapper before he resorts to killing his victim. Will he achieve his aim or die in the process?

Hangman is a gruesome crime-thriller that is not suitable for the squeamish. Think Dexter and Hannibal Lecter with more gore. It will keep you guessing and take you on a roller coaster ride of emotions that will leave you gasping at the end.

Jack Heath is the bestselling author of more than twenty action-packed novels for young adults and children, including the real-time series 300, 400 and 500 Minutes of Dangers, the choose-your-own-ending Countdown to Danger books and YA novels such as The Cut Out, a multi-award- nominated espionage thriller. His books have been shortlisted for many awards and have been translated into several languages and optioned for film and television.

First published while he was still a teenager, in the course of his research, Jack has toured morgues and prisons, performed as a street magician and travelled through eleven countries, including Russia. His enthusiastic presentations at schools and festivals have got thousands of kids hooked on reading. He plays several musical instruments and lives on the land of the Ngunnawal people in Gunghalin, Australia.