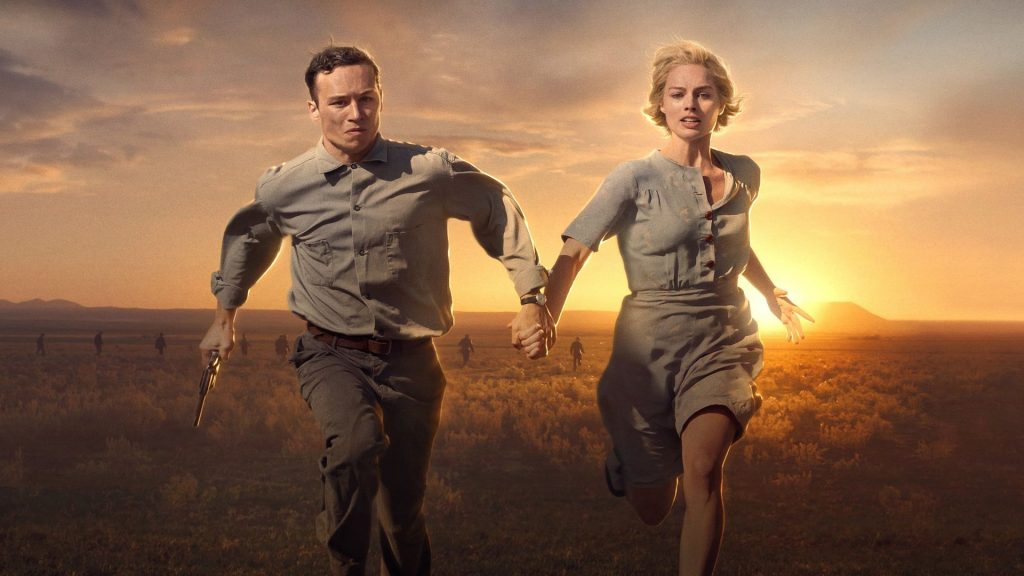 Bonnie and Clyde were two of the most infamous criminals of the great depression era, and it’s almost shocking how little the two have actually been covered in film in the 8 decades since their blaze-of-glory-like demise; the most famous covering being 1967’s Bonnie and Clyde with Warren Beatty and Faye Dunaway, whilst 1958’s The Bonnie Parker Story and the 2019 Netflix film The Highwaymen covered certain angles of the pair in a more indirect manner.

Dreamland poses the notion of what would happen to Bonnie if she didn’t have her Clyde.  If she was just a wounded fugitive hiding from the law.  In Miles Jorris-Peyrafitte’s romantic drama, the Bonnie archetype is embodied in Margot Robbie’s Allison Wells, a bank robber in the 1930’s who is wanted in several states for a series of crimes, one of which unfortunately resulted in the slaying of a young child.  It’s this incident that separated her from her Clyde, Garrett Hedlund’s Perry.

Fleeing on foot to a nearby farmhouse in the Dustbowl of America, Allison hopes a stray barn will keep her safe, only to be discovered by young Eugene Evans (Finn Cole), a fairly innocent (minus some petty shoplifting) teen who faces a moral dilemma upon finding her.  Knowing she’s worth a $10,000 bounty, Eugene’s first instinct is to turn her in, but such is the allure of Allison that she promises him double if he can get her safely to Mexico.

Wanting his own escape from under the thumb of his stern stepfather, George (Travis Fimmel, the model-turned-actor’s piercing blue eyes only adding to his character’s intensity), Eugene agrees to Allison’s request, only if he can accompany her.  She’s understandably hesitant, and intent on making it known whatever romantic inclinations he has towards her are not reciprocated, but his support proves valuable.

Having proven over her career thus far that she’s effortless at skewering our perceptions of an archetypal villain and transforming her characters into foundations of humanity and depth, Robbie’s take on Allison Wells is another prime example of the actress’ seductive quality.  As much as Allison has sinned, we understand just why Eugene would bend to her will, even when she makes it clear that any ideas of them running off into the sunset together won’t come to fruition.

As much as Robbie elevates the film whenever she’s involved, it’s a shame that she so often feels sidelined.  Allison and Perry look to have quite a fascinating background, and the brief glimpses we see of them together suggest a Bonnie and Clyde-type venture about these two is what should have been focused on in Nicolaas Zwart’s uneven script.  Cole makes for a fine lead as the conflicted Eugene, and the blossoming relationship between himself and Allison is perfect film fodder, but Dreamland never quite lands its narrative strands with their relationship, the conflict with his stepfather, the bond with his young sister (a wonderful Darby Camp), and Allison’s own background all earning focus without complete commitment.

With wonderful performances throughout, a breathtaking depiction of the isolated American landscape, and a final act that excitedly leans into the fugitive-on-the-run temperament the film so often teases, Dreamland is a product of so much promise.  It’s just a shame that its script fails to engage as much as it should, leaving what could have been a sweeping affair more an average fling that leaves little impression.

Academy Award® nominee Margot Robbie (Once Upon a Time in Hollywood) “is fantastic” (Indiewire) in this “dazzling” (Hollywood Reporter) love story set amidst America’s struggle during the Great Depression. Eugene Evans (Finn Cole, “Peaky Blinders”) dreams of escaping his small Texas town when he discovers a wounded, fugitive bank robber Allison Wells (Robbie) hiding closer than he could ever imagine. Torn between claiming the bounty for her capture and his growing attraction to the seductive criminal, nothing is as it seems, and Eugene must make a decision that will forever affect the lives of everyone he’s ever loved. Travis Fimmel (Warcraft), Kerry Condon (Avengers: Infinity War) and Lola Kirke (American Made) also star in this “beautifully shot coming-of-age story” (Indiewire).

Dreamland (MA15+) is screening in Australian theatres from December 17th, 2020.