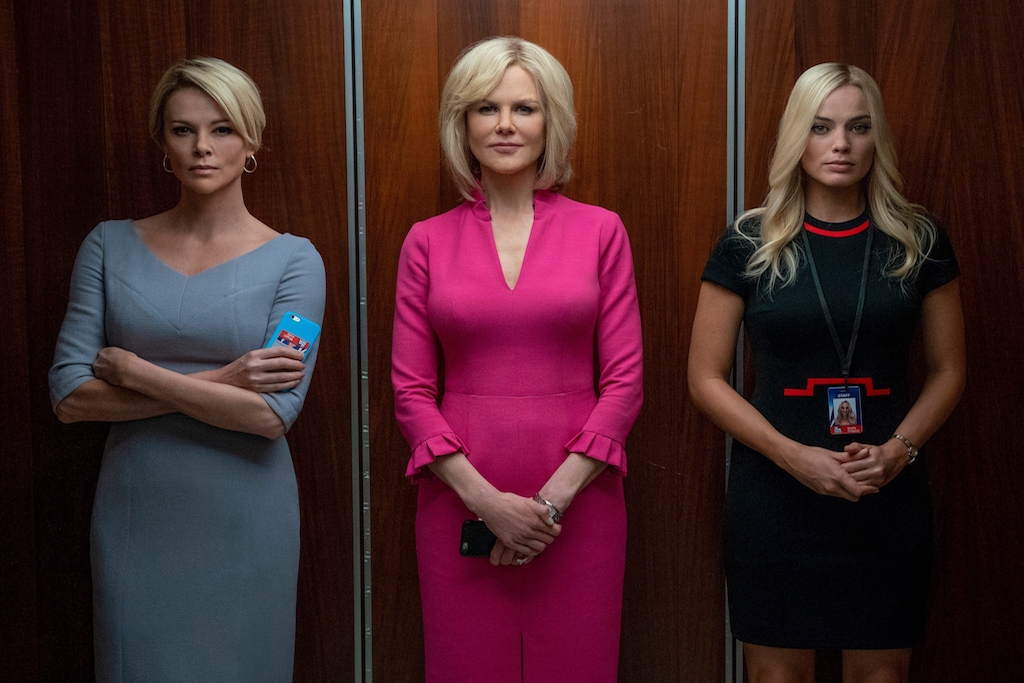 There’s something rather ironic about two of the lead focuses in the topical Bombshell – Fox News anchors Megyn Kelly (Charlize Theron) and Gretchen Carlson (Nicole Kidman) – paving the way for the eventual #MeToo movement that would rock the media industry.  Kelly and Carlson may not exactly fit people’s descriptions of what it is to be a feminist – let us not forget Carlson has a history of ranting against the rights of transgender people – but Charles Randolph’s script is more interested in the good deed that these divisive personalities did at the expense of someone who was much, much worse.

That someone is Roger Ailes (John Lithgow, grotesque under his prosthetics), the Fox Network CEO who was accused by multiple women in 2016 of sexual harassment.  As Margot Robbie’s wide-eyed, ambitious Kayla Pospisil (a composite character representing a multitude of women who fell victim to Ailes’s deviousness) is informed by her co-worker Jess Carr (a wonderfully understated Kate McKinnon) that a Fox story is anything that will shock and titillate its viewers, Randolph’s script follows suit with a narrative that is driven by a trio of women who may not agree with each other but band together on the mentality that the enemy of my enemy is my friend.

Bombshell never presents these women as entirely innocent, but through their delicate and stern performances we at least care about their plights.  Theron (eerily resembling Kelly through the use of subtle prosthetics and an altered vocal register) and Kidman keep us particularly engaged as they try so desperately to maintain their dignity and composure, but the coldness that they’ve had to adopt in order to survive the shark-infested waters of Fox isn’t always a strong enough component to hide the terror they live with each day, which in turn endears us to them on a human level.  Similarly, Lithgow effortlessly succeeds portraying Ailes as a power-hungry narcissist who, somehow, believes his actions aren’t remotely predatory or criminal.

Bombshell‘s strongest component though is Robbie, the ethereal talent acting as the audience’s naive insight into the female-strong but male-dominant world of news broadcasting.  Her experiences through the film show us the heartbreaking emotional carnage Ailes inflicted on his victims – a scene towards the end is utterly harrowing as she breaks down to McKinnon’s beautiful confidant regarding her personal contact with him – and as much as the film ends on the note that she emerges from the Fox News walls as a stronger woman, director Jay Roach (Trumbo, Meet the Parents) is smart enough to maintain a sense of harsh reality.

Though it’s telling an important story, Bombshell‘s nonetheless aiming for an entertainment factor too.  The politics of Fox News and the ultimate weight that had on viewers is a component that will most likely be lost on Australian audiences, but when it is boiled down to the material on hand it can’t be denied at the impact this film has, particularly for any women who have experienced situations similar to what’s being depicted on screen.

Bombshell (M) is screening in Australian theatres from January 16th 2020.