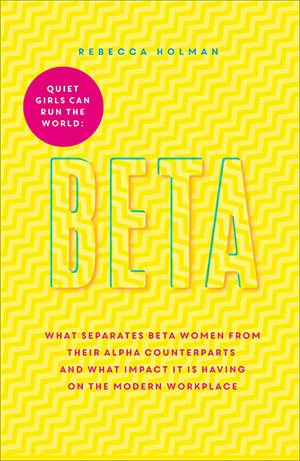 Beta by Rebecca Homan has a catchy tag line on how quiet girls can run the world. Yes, there is more than one way to be the boss but does it have to be so black (alpha) and white (beta)? The premise of the book is that women at work are either alpha or beta (or somewhere on the spectrum) is a simplification of people’s personalities and characteristics.

“We’re told that female success in the workplace is allowed to look only a certain way: big, brash and Alpha.”

Beta has the potential to be a good book, but the argument is based largely on personal opinion and experience. There were too many generalisations that I completely disagreed with. One of the early chapters deals with common work myths – none of which I have ever believed in the first place:

I enjoyed reading about the research and would have liked to have seen more of it to back up the argument. Just because pop culture portrays women managers in a certain way, doesn’t mean we have to believe it or aspire to be that stereotype.  Rebecca later writes about the dealing with alpha bosses, ‘having it all’ belief and struggling with imposter syndrome.

Beta is filled with anecdotes and case studies about the role of women in the modern workplace. You might enjoy it if you have similar beliefs to the authors.

Rebecca Holman is currently the editor of TheDebrief.co.uk, the award-winning digital brand for millennial women, sister publication to Grazia. Until recently, Rebecca wrote a weekly column about sex, dating and single life for Telegraph Wonder Woman. She has featured as a guest on TV and radio, recently appearing on the Victoria Derbyshire Show and Women’s Hour to discuss issues such as female friendships and social media.