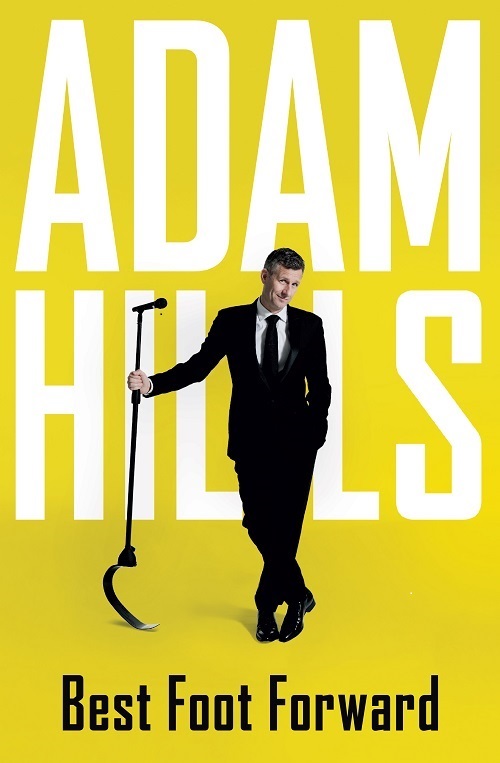 Best Foot Forward by Adam Hills, one of Australia’s best-loved comedians, is a humorous compilation of stories from his childhood, early years in stand-up, work in radio, graduation to the international comedy circuit and host of TV shows in Australia and the UK.

Despite his ‘funny foot’ (as he thought of it) it didn’t prevent Adam from joining his schoolmates to play footy, cricket and tennis or to go swimming. He recognises that he was a quiet kid at school, but when he did speak made sure it was funny. He was overjoyed to receive praise for his humour on a report card.

He tells of watching and listening with his father to the favourite comedians of the day, such as Allan Sherman and Victor Borge. Later they were entertained by Billy Connolly and Ben Elton, and marvelled at the incredible talent of Robin Williams.

Adam performed his first ‘open mic’ spot at the Sydney comedy store on the 13th July 1989 at the age of nineteen. Six months later he describes how he performed at the new Comedy Store in Surry Hills, and, ‘died on his arse’ as he tried to deal with a heckler and lost. But it made him even more determined to succeed.

Perfecting his act on the comedy club circuit both in Australia and abroad, Adam relates tales of his appearances at Fringe and Comedy Festivals alongside other popular comedians, such as Dara O’Briain, Ross Noble and Stephen K. Amos.

After his stints as a comedy writer and a presenter on morning radio and Channel 9 in Sydney, he tells of being offered the position of host on the ABC TV music quiz show ‘Spicks and Specks’. Working with Alan Brough and Myf Warhurst, and various celebrities from music and comedy, he also met the love of his life.

He was proud to host the opening and closing ceremonies for the 2008 Paralympics. This led to his current hit UK TV show ‘The Last Leg’ which he co-hosts with Josh Widdicombe and Alex Brooker. Originally running alongside the 2012 Summer Paralympics, it now gives a humorous, and often controversial, weekly review of the week’s events and features showbiz celebrities and politicians.

Adam Hills writes as he speaks with great warmth, humour, and enjoyment of his chosen profession. His is a story of working hard and never giving up on your dream to succeed at doing something you love. His good humour has made him many friends in the entertainment business and beyond. He has made ordinary people proud to be different. Adam brings these talents to the written page where he describes hilarious incidents with fellow comedians and, occasionally, members of the audience. He is awesome. He has touched ‘The Frog’!

Best Foot Forward is available in paperback, e-book and audiobook.

Adam Hills is best known to most Australians as the host of ABC TV’s top-rating music quiz show Spicks and Specks. The show was so popular that it ran from January 2005 to November 2011 for 7 seasons, 277 episodes and won five Logie Awards. He also had a hit with chat show Adam Hills Tonight. He has since taken the UK by storm with his own talk show, The Last Leg, which screens in Australia on the ABC. He’s won a Helpmann Award, released bestselling stand-up DVDs and performed for the Queen alongside Whoopi Goldberg, Lady Gaga and Bette Midler.