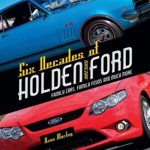 Six Decades of Holden Versus Ford by Dave Morley takes a look at 60 years of competition between the Holden and Ford brands from the 1960’s until the close of production in 2017. The Holden Company was the first to start the era of modern motoring in Australia in 1948 and had dominated vehicle sales until the latest Ford motor from the U.S. arrived in the 1960’s. It looked … END_OF_DOCUMENT_TOKEN_TO_BE_REPLACED