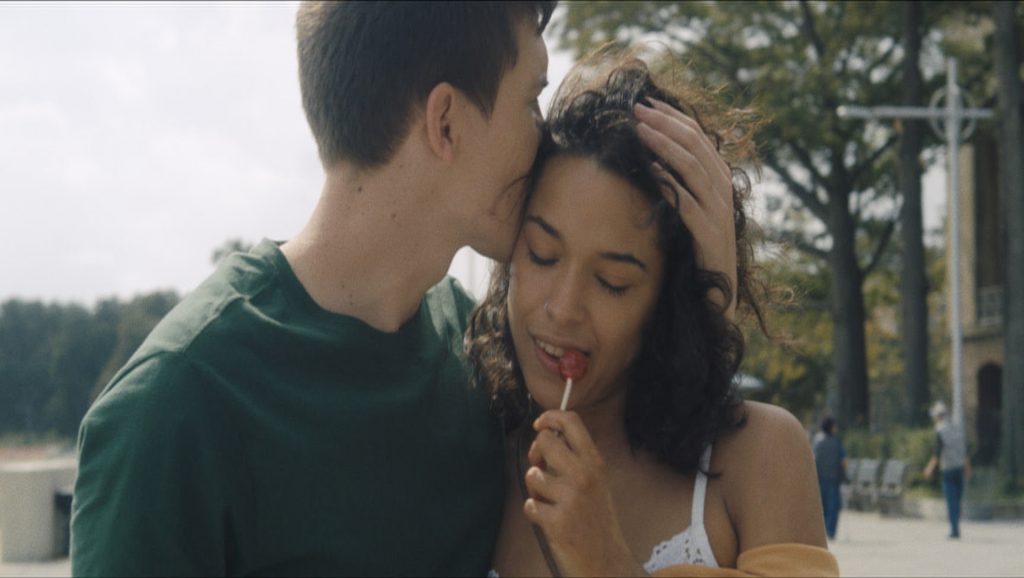 A less-tragic take on the Romeo & Juliet narrative structure, Angelfish is a delicate romance set in early 90’s New York where the parallels of the city’s hardships and that of a blossoming relationship run in unison.

Written and directed by Peter Andrew Lee, the film follows quiet high-school dropout Brendan (Jimi Stanton) as he tries to maintain an honest living among the chaos of his home life; his brother (Stanley Simons) hangs out with the wrong crowds in their neighbourhood, whilst his mother (Erin Davie) lives a particularly promiscuous existence that has seen her essentially negate all aspects of parenting duties.

One day at work he happens upon Eva (Destiny Frasqueri aka rapper Princess Nokia), a Puerto Rican with her own familial baggage.  It isn’t the standard love, or even like, at first sight, but Brendan manages to stoically charm his way into her attentive sights, and as they learn about each other, her home struggles come to light.  Fighting off pressure from her traditionalist mother who is hoping she’ll go to college and earn a degree in accounting, in addition to caring for her younger siblings, Eva’s aspirations are to be an actress.

Though not exactly breaking a mould when it comes to story structure, Angelfish nonetheless captures your attention due to how organically it portrays the relationship between Brendan and Eva.  You’re never quite certain as to whether or not their courtship will survive, and it’s in that un-perfect portrayal of their union that the film seemingly overcomes any plot predictabilities.

It’s greatest strength though lies in the central performances of Stanton and Frasqueri, with the latter particularly commanding throughout.  This is more Brendan’s movie per se from a narrative focal point, but where Stanton’s performance feels a little too internalised at times, Frasqueri runs the gamut of emotions as her character revels in the joy of new love, the prospect of acting opportunities, the guilt of disappointing her mother, and the pain in realising her relationship with Brendan may not be sustained.  It’s a beautifully realised performance from an inexperienced actress whose spark is immediate from the moment she’s on screen.

In Angelfish, Eva (Frasqueri), meets Brendan while in the midst of an immense amount of family pressure to pursue college and also to help her single mother (Berrido) care for her disabled brother (Ivan Mendez). When the two fall in love, the weight of their individual worlds is temporarily relieved, until they are each forced decide between their new dreams and their old responsibilities.

Angelfish (TBC) is available to stream through Tubi