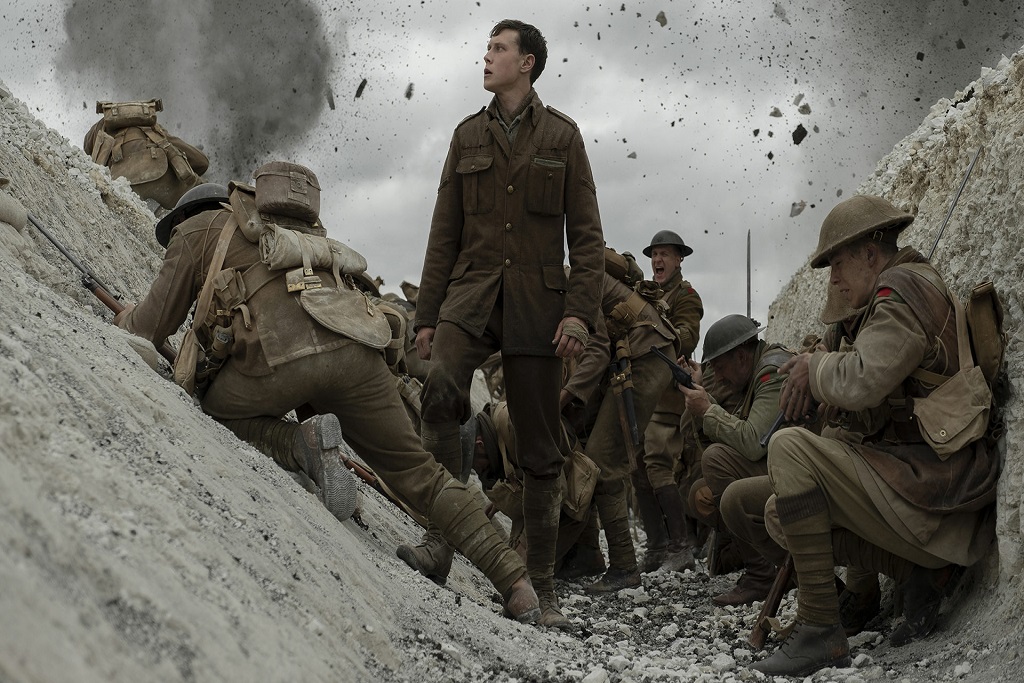 Given 1917‘s rather simplistic plot – a pair of infantrymen having to cross the treacherous No Man’s Land in order to prevent a doomed attack during the height of World War 1 – it makes sense that director Sam Mendes (Skyfall) would opt for a more complex manner to detail the story.  Single camera shots and extended moments of action infused with a haunting stillness linger across the screen in a surprisingly effective manner, a potential gimmick that never comes off as anything other than masterfully assured.

Throughout the film’s near 2-hour running time, Mendes and lauded cinematographer Roger Deakins (Skyfall, Sicario, Blade Runner 2049) maintain sole focus on Corporals Schofield (George MacKay) and Blake (Dean-Charles Chapman), seemingly not even allowing themselves to blink in their determination.  Though the dreary, depressive palette of No Man’s Land and the lack of dynamic angles earned through eye-level camera placement means Deakins’ work doesn’t seem as initially impressive as his aforementioned recent work, it’s both a necessary ingredient and side-effect to keep a sense of antisensationalism about the horrors we are watching unfold.

Ultimately the decision to track these men in a seemingly unending shot results in a forgettable outcome, and I mean that in the most respectful manner as, such is the skill of both Mendes and Deakins, it completely washes away as you become wholly immersed in their plight.  You become accustomed to watching soldiers walk and talk, tracking them as they perform the most natural of acts.  It’s in this reality that allows 1917 to work to maximum effect, almost as if we are a helpless fly-on-the-wall as devastating set-pieces unravel before us and linger long after they have exited the frame.

This technical additive also means MacKay and Chapman shoulder the lion’s share of the film’s considerable weight.  Whilst it’s easy to pick apart the plot’s typical “war film 101” tropes – shetering a civilian, the opposing soldier and their wounds, the sole female begging our hero not to go – the actors are so incredibly committed that they transcend both any story familiarity and the industrial presentation itself.  It’s also beneficial to the organic nature of the film that MacKay and Chapman aren’t instant names in their field with their everyman-type demeanours, with Mendes only momentarily opting for star-power clout with Colin Firth, Benedict Cumberbatch, Andrew Scott, Richard Madden, and Mark Strong arriving in the most diminutive of roles.

Based in part on an account Mendes’ paternal grandfather Alfred Mendes recalled to him, 1917 is ultimately an emotional journey grounded in humanism.  It’s visually spectacular and undoubtedly a polished feat of filmmaking craft, but its technical soundness doesn’t mask the dark, almost sinister undercurrent of the story’s tenacious nature, something that reminds us of the hope and horrors that often merge throughout history’s most defining moments.

Sam Mendes, the Oscar®-winning director of Skyfall, Spectre and American Beauty, brings his singular vision to his World War I epic, 1917. At the height of the First World War, two young British soldiers, Schofield (Captain Fantastic’s George MacKay) and Blake (Game of Thrones’ Dean-Charles Chapman) are given a seemingly impossible mission. In a race against time, they must cross enemy territory and deliver a message that will stop a deadly attack on hundreds of soldiers—Blake’s own brother among them. 1917 is directed by Sam Mendes, who wrote the screenplay with Krysty Wilson-Cairns (Showtime’s Penny Dreadful). The film is produced by Mendes and Pippa Harris (co-executive producer, Revolutionary Road; executive producer, Away We Go) for their Neal Street Productions, Jayne-Ann Tenggren (co-producer, The Rhythm Section; associate producer, Spectre), Callum McDougall (executive producer, Mary Poppins Returns, Skyfall) and Brian Oliver (executive producer, Rocketman; Black Swan). The film is produced by Neal Street Productions for DreamWorks Pictures in association with New Republic Pictures. Universal Pictures will release the film domestically in limited release on December 25, 2019 and wide on January 10, 2020. Universal and Amblin Partners will distribute the film internationally, with eOne distributing on behalf of Amblin in the U.K.