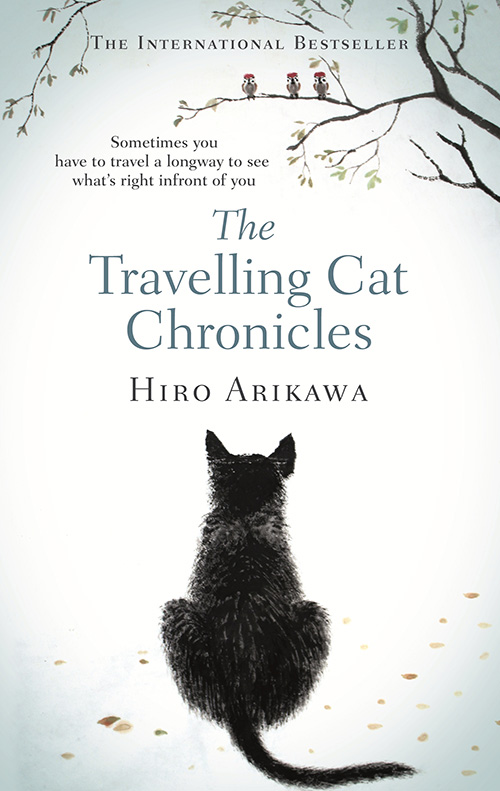 The Travelling Cat Chronicles by Hiro Arikawa, a bestselling novel in Japan, is now internationally acclaimed after the translation by Philip Gabriel, who is best known for his translation work with Haruki Murakami.

This is the story of Satoru and his cat, Nana, who partly narrates the story. After five years of living together, Satoru decides to travel with Nana throughout Japan to visit friends from his childhood. He hopes that one of them will provide Nana with a new home.

They travel in a silver van, firstly to see Kosuke, a former classmate, who shares the story of Hachi, another cat that Satoru loved. Kosuke now runs his Father’s photography business and is unsure of his ability to do so or of his relationship with his wife.

Satoru moves on to visit Yoshimine, who has found peace through tending his Grandmother’s farm. He and Satoru share memories of playing truant on a school holiday and the love they had for Yoshimine’s Grandmother, who taught them both the satisfaction of raising vegetables.

Next, they head off to visit mutual High School friends, Sugi and Chikako, now husband and wife, who run a hotel for pets with stunning views of Mount Fuji. Here Nana meets their pets Toramaru, Sugi’s dog and Momo, Chikako’s elderly cat.

Finally, Satoru drives the van onto a ferry to Hokkaido to visit his Mother’s younger Sister, Aunt Noriko. To reach Sapporo, where his Aunt lives, they travel through the magnificent countryside, enjoying the purple and yellow of the wildflowers, the red berries of the mountain ash trees and the snow-tipped mountains.

Who will take Nana and where will their journey end?

This is not merely a story of a man and his cat, but a beautifully written novel of the importance of the love and loyalty of friends, whether two or four-legged. Nana’s narrative adds humour and a cat’s perspective of humans, other animals and the beauty of nature. The two characters are so intuitive of each other that they travel as equals. A memorable book to keep and re-read for the pleasure of re-living the journey.

Available as a trade paperback, hardback and ebook.

Hiro Arikawa lives in Tokyo. She won the tenth annual Dengeki Novel Prize for new writers for Shio no Machi: Wish on My Precious in 2003, and the book was published the following year. It was praised for its love story between a heroine and hero divided by age and social status, and for its depiction of military structures. Although she is a light novelist, her books from her second work onwards have been published as hardbacks alongside more literary works.

A bestseller in Japan, The Travelling Cat Chronicles has become an unexpected international hit. It is due to be made into a live-action Japanese film.