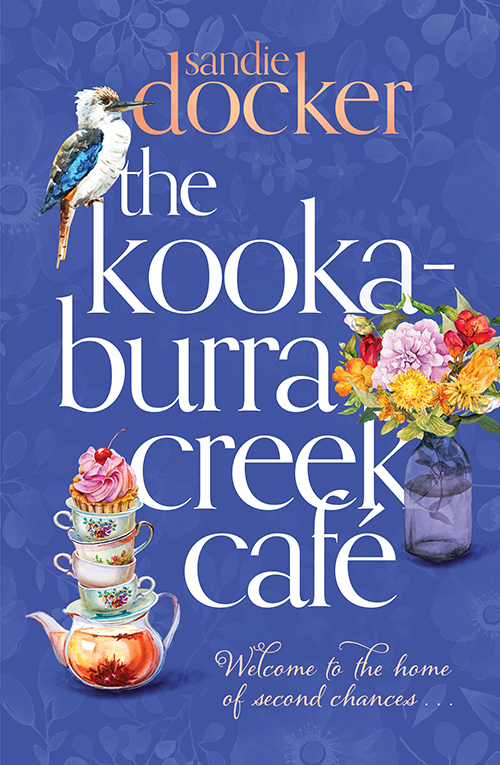 The Kookaburra Creek Cafe by Sandie Docker is her first novel and tells of romance, friendship and the love and support of a community in a small Australian country town.

Throughout the novel there is a movement in the time frame from the present day back to 2003, then further back to 1967.

Hattie is the first to seek refuge in Kookaburra Creek when she flees from Sydney with her dreams in tatters, taking her sister Genevieve with her. The original cafe is established in a building that was given to Hattie as an engagement present. Genevieve, who has been badly injured, is able to run the cafe until years later the onset of dementia necessitates a care home.

Fortuitously, Alice is stranded in the town when her car breaks down. Destitute and pregnant, she is in need of a home and a job. Hattie is looking for a manager for the cafe and employs Alice, who quickly learns to prepare and cook meals. These include a variety of amazing cupcakes suggested by the enigmatic Sylvia.

Some fifteen years later Becca, a teenager, who has run away from home, is persuaded to help out at the cafe in return for food and shelter.

The three women become firm friends and an integral part of the Kookaburra Creek community, where troubles are shared and there’s always a helping hand.

This book addresses issues that cause women to leave their families and friends in dread of the future. In these instances, the women all find happiness in a small town that accepts them without question.

Well-written and heart-warming with the addition of Alice’s cupcake recipes at the back of the book. Do try them!

Sandie Docker grew up in Coffs Harbour, and first fell in love with reading when her father introduced her to fantasy books as a teenager. Her love of fiction began when she first read Jane Austen for the HSC, but it wasn’t until she was taking a translation course at university that her Mandarin lecturer suggested she might have a knack for writing – a seed of an idea that sat quietly in the back of her mind while she lived overseas and travelled the world. Sandie first decided to put pen to paper (yes, she writes everything the old fashioned way before hitting a keyboard) when living in London. Now back in Sydney with her husband and daughter, she writes every day.