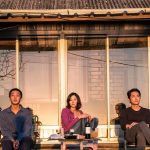 This article contains spoilers for the plot of the film Burning. The Korean film Burning is based on a short story, ‘Barn Burning’, by internationally acclaimed Japanese writer Haruki Murakami. It apparently led to an obscure script. It’s has a basic plot of boy-meets-and-loses-girl. The film deals with themes of modern class issues, love and loss. 1. Jong-su's … END_OF_DOCUMENT_TOKEN_TO_BE_REPLACED