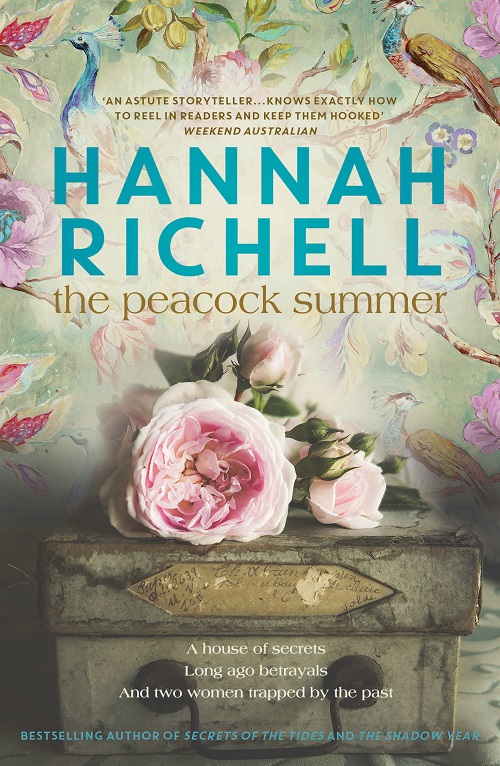 The Peacock Summer by Hannah Richell is her third novel, is a gripping story of illicit love, violence and betrayal that resonates down through the years.

Just after the end of WW2, when Lillian was just twenty one years old, she received a proposal of marriage from the widowed, local aristocrat, Charles Oberon. Hoping to bring happiness back into Charles’ life and to care for his six-year-old son, Albie, whom she loved, she accepted. Her only living relative, Helene, who was badly damaged by shrapnel during the war, needed full-time care. Charles arranged for her to live in a private nursing home for which Lillian was relieved and grateful. After their marriage Lillian moved into Charles’ Chilterns manor house, Cloudesley, where he and his late father had built up large and diverse collections of beautiful and valuable items.

After living there for a short while she discovers Charles’ true nature. He is a domineering, manipulative, hot-tempered bully. She begins to feel trapped in what proves to be a loveless marriage. But her love for Albie and Helene’s welfare gives her no option other than to remain.

In the summer that Lillian was twenty-six Charles decided to commission a talented young artist to decorate a room in the west wing of the manor. It is to house the rarest and most valuable items of his collection. When Jack Fincher arrives Lillian has resigned herself to a life of playing lady of the manor. She tries to keep her husband happy by entertaining his friends at the numerous house parties and by attending functions in the local village. Worn down and intimidated by her husband’s demands, only Albie makes life bearable.

What happens next and the choice she is forced to make will almost break her.

Sixty years has almost passed when Maggie Oberon, Lillian’s granddaughter, receives a phone call. The grandmother that loved and raised her has been taken ill and is in hospital. Maggie leaves Australia, where she has been living, and hastens to Lillian’s bedside.

Once assured by the hospital staff of her care, Maggie returns to Cloudesley knowing that she must soon face the inhabitants of the village that she fled from a year ago. She finds the manor has fallen into even greater disrepair and that her grandmother has overwhelming debts.

Will it be possible to find a way to save Cloudesley with the help of a former friend, now an embittered adversary?

Both women are forced to face their past, reconcile themselves with the truth and hope that secrets held by Cloudesley for sixty years will be revealed.

This wonderfully crafted novel is an absolute must read. It tells of cruelty, love and heart wrenching choices that end in calamity and withheld secrets. As all is revealed, there is an astonishing twist in the tale!

The Peacock Summer is available in paperback, e-book and audiobook.

Hannah Richell was born in Kent, England, and spent her childhood years in Buckinghamshire and Canada. After graduating from the University of Nottingham in 1998 she worked in book publishing and film in both the UK and Australia. She has also written for media outlets such as Harper’s Bazaar, The Australian Women’s Weekly, Fairfax and the Independant. Hannah began to write her first novel while pregnant with her first child. The result was Secrets of the Tides, picked for the 2012 Richard & Judy Book Club, the Waterstones Book Club and shortlisted for the Australian Independent Bookseller Best Debut Fiction Award, ABIA General Fiction Book of the Year (2013) and ABIA Newcomer of the Year (2013). The novel has been translated into fourteen languages, as has her follow-up novel The Shadow Year. Hannah is a dual citizen of Great Britain and Australia and currently lives in the South West of England with her family.