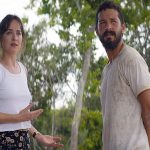 After meeting aspiring actor Zack Gottsagen at a camp for performers with disabilities (Gottsagen has down syndrome), writing/directing duo Tyler Nilson and Michael Schwartz knew they had to make a film for him.  Taking Gottsagen's own desires of being an actor and altering it slightly for his character (also named Zak) - here it's a love of wrestling - The Peanut Butter Falcon … END_OF_DOCUMENT_TOKEN_TO_BE_REPLACED