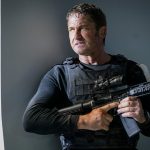 The third entrant in what I can only assume we're referring to as "The Fallen Trilogy", Angel Has Fallen very much operates as its own, 1980's-type actioner that works for both audiences familiar with the previous entries - 2013's Olympus Has Fallen and 2016's London Has Fallen - and those unversed. After thwarting a duo of prior assassination attempts on the President of the … END_OF_DOCUMENT_TOKEN_TO_BE_REPLACED